This is my first SoundLand, and I was not disappointed.  Last night, I wandered through sets by Machines Are People Too, Foster The People, Carl Broemel, Ben Sollee, Uncle Skeleton, and Boss Of Nova.  I ramble below.

Machines Are People Too are a Chattanooga, TN three piece of electronica, keyboards, and drums.  With the exception of Foster The People, this was the most energetic crowd I saw of the night, and, dare I say, they upstaged the “band of the summer”, Foster The People.  They brought a raw energy to MAI last night, and just took control of the half-filled room.  Maybe, it was just my excitement that it was my first show of the night, but I will definitely look out for these guys when they make their next trip through Nashville.

Foster The People played the 12th Avenue South Stage.  It was good, but I wish that I had seen them several months ago.  There is something about watching a bunch of grown (not-gay) men dancing around frantically screaming “All The Other Kid With Their Pumped Up Kicks….” just kind of put me off.

After FTP, I walked over to Station Inn to catch the end of Carl Broemel.  It was quite the different atmosphere with everyone gazing like they were stoned to the trippy guitar work of the My Morning Jacket guitarist gone solo.  He was on stage alone and was alternating between pedal steel and electric guitar while looping his sounds.  That was wild.

Ben Sollee was the next to take the stage at Station Inn.  The introduction to the set stated my words exactly, “I saw Ben Sollee at Bonnaroo, and it was one of the best sets of music I have seen this year”.  It’s a pop infused cello based folk music that is simultaneously relaxing and viscerally invigorating.  I know that sounds like it doesn’t work, but it just does.  You have to see it to understand.  Broemel even hopped on stage to improvise his way through a song with Sollee to add another layer of texture.  Definitely one of the highlights of the night.

I’m no rookie to festivals, and I know that these events require a stamina that can be zapped for the weekend if you over-do your first full day.  So, I was heading back to the car, when I decided to poke my head in to see Uncle Skeleton and Boss Of Nova.

Uncle Skeleton is a Nashville based collective, and they must have had 387 people on stage with them.  I kid, i think it was only 11, but on a stage the size of 12th and Porter that seems like a much larger number.  (See the picture below with three [i think] people who couldn’t fit in the frame).  It’s a hyper, orchestrated party vibe full of horns, drums, guitars, strings, etc.  The, obviously intoxicated at this point, crowd was going nuts running around and dancing, and the band could feel the energy in the room. 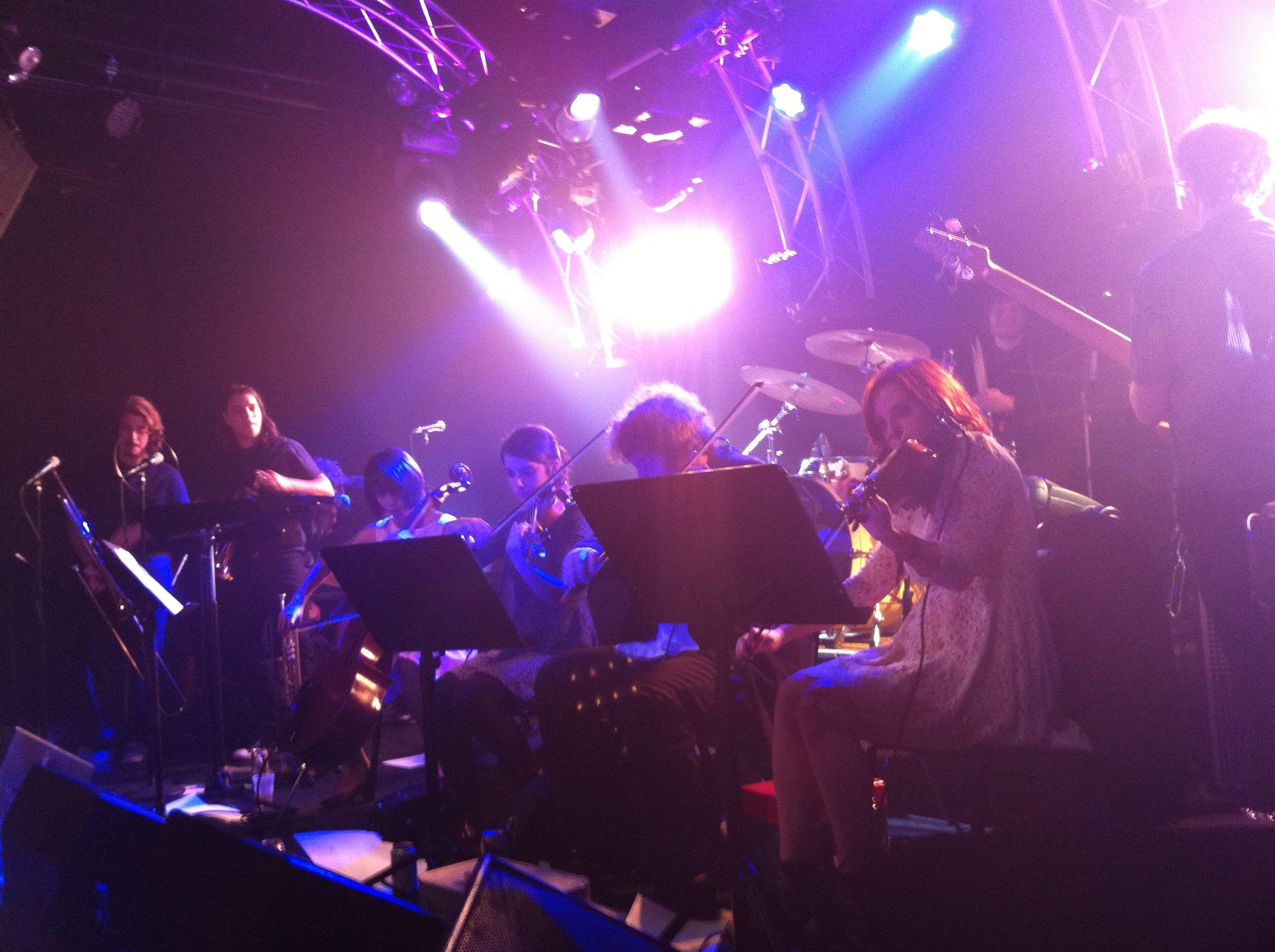 I don’t know much about Boss Of Nova, but, I know that when I walked into MAI for my last stop of the night, he was playing a super chilled out version of Lykke Li’s “Little Bit”.  That in itself is worth sticking around for, and I’m glad I did.  It’s some electronic beats and backing along with a cellist, keyboardist, and one beanie-hatted, acoustic guitaring, smooth singing front man, that I can only assume is the Boss of Nova.  It was a perfect way to bed down my first night of SoundLand.

The highlight of the night was….

Ben Sollee walking up to Anais Mitchell (she opened the night at Station Inn) before he went on stage, and asking her to autograph her CD for him.  It was a moment when the “opener” gets mad respect from the “closer”… serious artist to artist love.

The lowlight of the night was….

Going to the SoundLand Registration House to find it closed at 8:15pm.  The website says that you MUST go to the Registration House to redeem your paper tickets for bracelets, and you CANNOT redeem your tickets at any venue.  There were no instructions on the locked door, and a gaggle of people standing around bitching about it.  Luckily, The Cannery is right next door, so I jogged over to find out what to do, and they told me to go to 12th Avenue Stage where you can redeem your paper tickets for wristbands.  Note to the SoundLand folks, I know you are a small team, and you are doing a great job…. but, seriously, put a sign on the door of your closed Registration House giving your peeps instructions!