I spent the last 24 hours in Manchester to visit with an old college buddy, Kerry Black, who co-founded Superfly Presents & Bonnaroo.  In the midst of catching up, here is a little run-down of some Tennessee related stuff that we chatted about.

No Country (NC): What made you chose Manchester to start Bonnaroo?  Where else were you looking?

Kerry (KB): We were looking for a venue in the southeast or the midwest because at that time there were festivals on the coasts, but there wasn’t anything really in the middle of the country on the scale that we were looking for.  Not to mention, we were looking for a central site that people could travel in from all directions to get to.  We looked at sites in Mississippi and Georgia.  We were meeting with someone in Atlanta, and he said he knew a place in Manchester that had just hosted a big 70’s rock festival.  We went to take a look at it, and it just felt right.

NC: You guys have made quite a difference in this part of Tennessee.  I mean, the State of Tennessee added another exit off the freeway for Bonnaroo.  Cell companies have added more cell towers for Bonnaroo.  New hotels and restaurants and jobs have been created because of Bonnaroo.  Everyone in Middle Tennessee knows that Bonnaroo is coming through town.

KB:Yeah, it’s pretty awesome everything that has happened in the first 10 years of this festival.

NC: How do you find all these bands?  Is there some Music Festival Superstore that all of the festivals (i.e. Coachella, Sasquatch!, Lollapolooza, etc.) shop at, and you just choose a package that fits your budget?

KB: Haha.  I wish it was that easy.  It’s a lot of work to book these bands.  There are bands that we want to have here, but it’s really about who is out touring….. and who will be in the area at that time.  For instance, U2 is playing in Nashville this summer, but their tour is already set… not to mention we don’t have the infrastructure to handle their stage set up….  that thing is crazy.  Otherwise, it is a lot of working with agents.  A lot of give and take, and you have to be really flexible.  I mean, after last year’s festival, we got right back into scheduling for 2011.  For the first month or so, the headliners we thought we would feature are completely different from what the lineup is today, but we are really excited about how it turned out.

NC: Do you work to bring in local bands?

KB: We have started our cafe’ stages which we try to fill with local acts.  It helps us to bring more of the local folks out to see their friends play, it gives these artists the chance to play along side some of the biggest acts right now in the country, and it gives us a chance to give back to the area.

NC: I started this blog to be a non-country, nashville-centric voice.  For instance, I saw Dale Earnhardt Jr Jr (DEJJ) and the The Generationals at the Basement not too long ago, and it was pretty empty by comparison of bigger cities.

KB: That new DEJJ record is awesome.  Is the Basement where Metallica played?

her: you guys here for Bonnaroo?

NC: No, flew in to do some antique shopping.  what’s Bonnaroo?

her: Bonnaroo is only about 100,000 people that come here to watch some music

It is a pretty big deal for everyone, but especially for Manchester and the surrounding communities.  You can see the sense of pride that Bonnaroo has instilled in this area.  While I am sure that it makes traffic tough, and there are some folks that must hate “all these kids with their rock n’ roll music” crashing this otherwise quiet, peaceful little town, Manchester is a part of the national music consciousness now, and a lot of Manchester businesses rely on these couple of weeks to make ends meet for the year.

I’ll tell you that hanging out down there and getting a tour around the festival grounds today has me very excited for some music this coming weekend, but it also made me think that this arch needs a hat!! 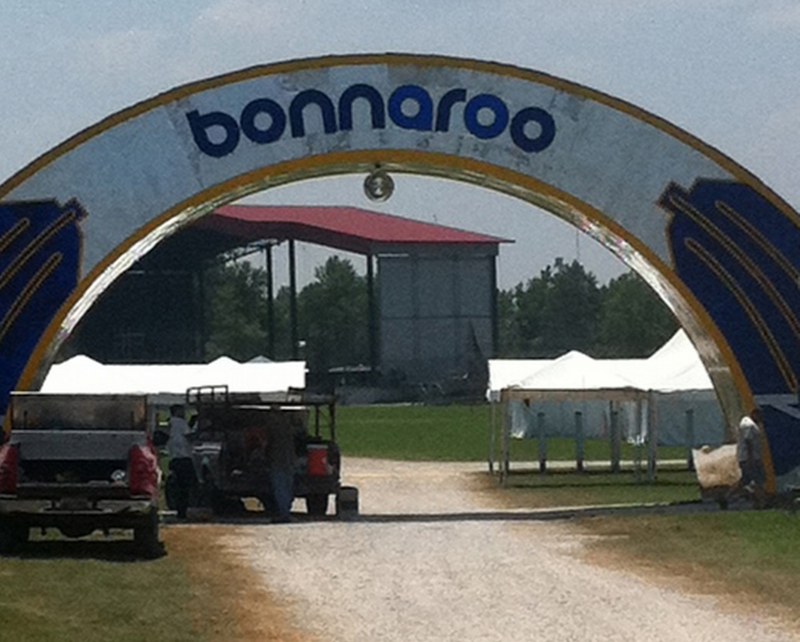 TV On The Radio and Broken Social Scene at The Mother Church!!!