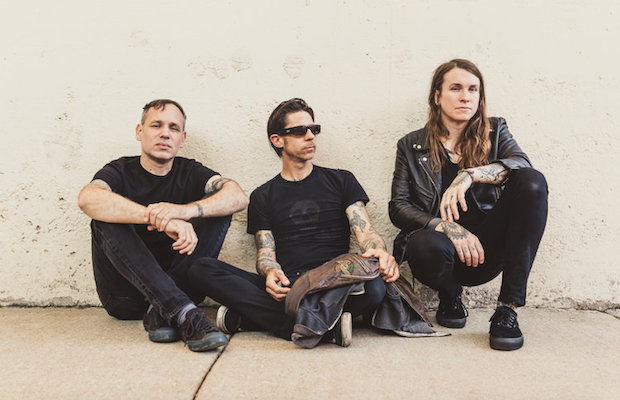 Though her famed, long-running group Against Me! have made their way to Nashville plenty of times in recent years, frontwoman Laura Jane Grace is primed to make her solo debut in Music City with side project Laura Jane Grace & The Devouring Mothers tonight, April 28 at The Basement East. Not totally dissimilar from her main gig, The Devouring Mothers showcase Grace’s artistic sensibilities when delivered without any preconceived expectations, and the result is a debut LP that weaves across genres and takes a breather from some of the topics that typically define her work, serving as a refreshing and new direction for an artist we’ve admired for decades. Joined by New Jersey rock supergroup Mercy Union and buzzy up and coming Philly post-punks Control Top, this is, without a doubt, one of our most-anticipated shows of the spring, and you can still snag tickets right here while they last, then read on for more about the show!

Best known for fronting beloved Florida punk band Against Me! for more than 20 years, famed rocker, author, and activist Laura Jane Grace explores new territory with her full-length solo debut, released last fall under a side project dubbed Laura Jane Grace & The Devouring Mothers. Aside from a folk punk solo EP over a decade ago, and a stripped-down tour in 2016 which more or less served as the genesis of The Devouring Mothers, the project’s debut LP, Bought to Rot, marks the first time since Against Me!’s ascent that Grace has unplugged from the rigidity of the punk world and her main band’s established stylings, instead exploring a huge new range of genres, largely straying from political and social geared topics in favor of more personal musings, and, particularly applicable to more recent years, shying away from her inherent position as an ambassador and advocate for the transgender community, a mantle she’s held since first coming out as a trans in 2012 (and has commented on extensively across two Against Me! LPs, a book, and even a TV series). Backed by current Against Me! drummer (and longtime punk scene staple) Atom Willard and bassist Marc Jacob Hudson, best known for his production and sound engineering work, The Devouring Mothers feel like a small-scale, low stakes, expectation-free outlet for Grace, who credits Tom Petty’s own first foray into solo work, Full Moon Fever, as inspiration. That’s not to say Bought to Rot sounds just like a Petty record though; instead, it shape shifts from track to track, still seeped in the punk sounds Grace has embraced since her teens, but also free to tackle folk, indie, pop rock, and post-punk, all wrapped around ideas a bit looser, less self-serious, more personal, and more mediative than most typical Against Me! cuts. By all accounts, Against Me! will return rested and rejuvenated in the future (especially exciting since they recently reunited with longtime bassist Andrew Seward), but this new outlet feels both necessary and cathartic for where Grace is personally and artistically right now, and we can’t wait to see what the future holds for The Devouring Mothers as well. Don’t miss their Music City debut!

Like The Devouring Mothers, New Jersey’s Mercy Union are technically a new project, having just released their first full-length, The Quarry, last fall, but are also a band of seasoned punk scene vets, counting The Scandals’ Jared Hart and The Gaslight Anthem’s Benny Horowitz among their ranks, along with Rocky Catanese and Nick Jorgensen. Already, the group have shared the stage with the likes of John Nolan, The Menzingers, and Dave Hause, and with their raw, earnest, punk tinged and heartland rock geared sound, the sort of working man’s punk and alt rock that bands from the northeast always seem to do best, are perfectly well-suited to compliment this lineup.

Rounding out the bill as another new, must-know name in the punk world, Philly’s Control Top sprung onto the scene with their eponymous EP in 2016, before drumming up a lot more buzz for last year’s “Type A,” the opening track from their brand new (as in, released just weeks ago) first full-length, Covert Contracts. Adding even more variety to this impossibly cool lineup, Control Top adopt a dance-primed, noisy, post-punk sound, earning the trio both a growing underground fanbase and critical acclaim from taste-making outlets. This is the kind of on-the-rise band you’ll want to arrive early for, so make a point to be punctual!