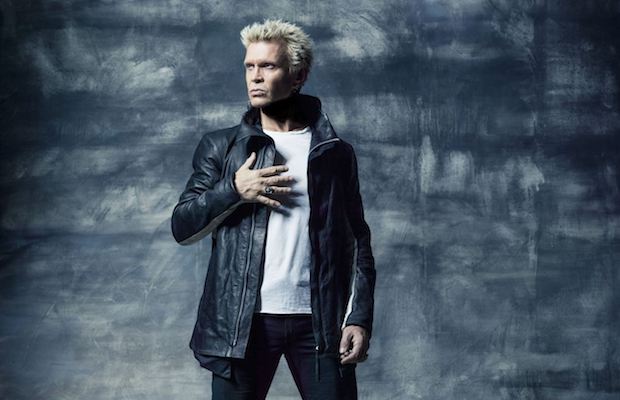 Punk/glam/hard rock icon Billy Idol made history more than a decade ago with the 1985 release of his remix album, Vital Idol. Years before dance-floor primed remixes were widely in vogue, Idol helped cement the vibrancy of the genre in the late ’80s, all the while continuing to release his own seminal original work, and has remained a vibrant and iconic figure in rock in the years since.

With the brand new release of a spiritual followup, Vital Idol: Revitalized, Billy is once again reimagining his most essential hits with the help of modern dance and remix producers; not a reissue of the original LP, but a new effort thorough a 21st century lens. Continuing a prolific comeback, which began with 2014’s Kings & Queens of the Underground and a best-selling autobiography, and now in support of his new remix effort, Idol is slated to return to Nashville for the first time since 2015 (which was his first Music City stop in nearly three decades), for not one, but two appearances today, Sept. 28.

First, Idol, along with longtime guitarist and collaborator Steve Stevens and Grammy winning DJ and remixer RAC will perform a free, 21+ afternoon event at Third Man Records. Set to run from 2-5 p.m., expect to hear new tracks from Vital Idol: Revitalized, a DJ set, and some songs from Billy (though given the nature of the special event, don’t expect a full concert). You must RSVP here for entry, though admission is first come, first served, and the Blue Room is very small, so arrive early for the best chance to get in.

Then tonight, Idol’s tour hits the Carl Black Chevy Woods Amphitheater at Fontanel, for a full show, also featuring RAC, which we imagine will be a career-spanning set with a few new remixes thrown in to celebrate his latest effort. It’s slated to begin at 7:30 p.m., and tickets are still available in a variety of sections and price points here. While seeing Idol in an intimate, special space like Third Man sounds unforgettable, the ambience of Fontanel is spectacular as well, so you can’t go wrong seeing this legendary performer at either (or both) location!

Billy Idol will perform today, Sept. 28 at Third Man Records with RAC. The show is 21+, doors open at 2 p.m., and admission is free, though not guaranteed, with RSVP.

Billy Idol and RAC will then perform tonight, Sept. 28 at the Carl Black Chevy Woods Amphitheater at Fontanel. The show is all ages, begins at 7:30 p.m., and tickets are available to purchase for $29.50-75.