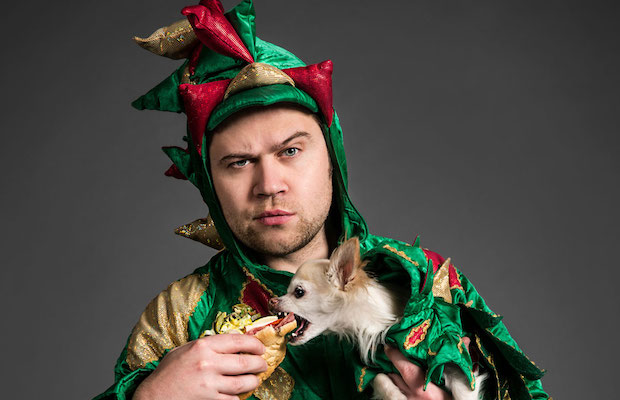 Primarily a magician rather than a comedian in the traditional sense, Piff the Magic Dragon is, nonetheless, one of the funniest magicians we’ve ever encountered. Sure, his premise alone, a man in a dragon suit with a chihuahua sidekick, Mr Piffles, also in dragon attire, poking fun at the showmanship of illusion-based magic is kind of hilarious in a literal and meta sense, but his dry, British sense of humor and absurdist approach of seeming like a lackluster magician before genuinely pulling off some incredible and breathtaking tricks is uniquely wonderful. Born John van der Put in London, the rising star harbored an early attraction to magic and drama, experimenting with early acts before creating his Piff persona in 2008. He quickly gained buzz with a several years of show-stealing performances at the popular Edinburgh Fringe Festival in Scotland, eventually finding a broader audience stateside after an appearance on Penn & Teller: Fool Us in 2011. Though Piff has toured the world, including a UK run of dates with Muford & Sons, and has performed for audiences in countless prestigious theaters and halls, he is, perhaps, best known for appearing on America’s Got Talent last year, advancing to the finals and captivating crowds nationwide. More recently, Piff and Mr Piffles have taken us residence in Las Vegas, and have performed both headlining residences and as part of high-profile series. One of the most unique performers at Bonnaroo this summer, if you’re looking for something very different than just music, make Piff the Magic Dragon a priority.