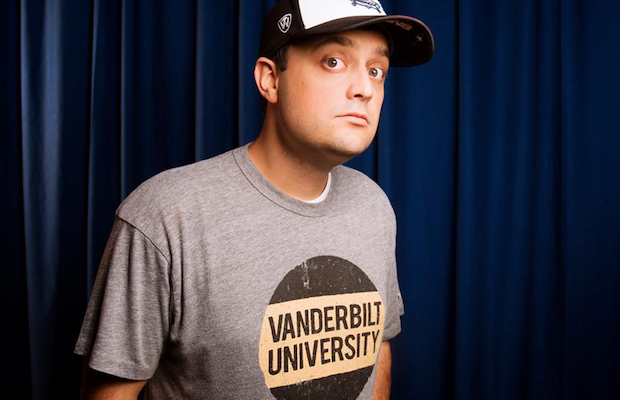 Returning Bonnaroo performer Nate Bargatze is notable not just for his buzzworthy comedic rise, but also because he grew up just outside of Nashville, and, after years of living in Chicago, New York, and LA as his career developed, he and his family recently moved back to Music City permanently. In his early ’20s and with no standup experience, Nate was convinced by a friend to move to Chicago and begin taking classes at Second City, where he quickly found a knack for performing, and soon relocated to New York. In the 14 years since, Bargatze has grown into fixture in the standup scene, bagging multiple appearances on Conan, Late Night with Jimmy Fallon, festivals like Bonnaroo, Montreal Comedy Festival, and SXSW, and on podcasts like WTF with Marc Maron and You Made It Weird with Pete Holmes. Nate has found praise from some big names in the comedy world, such as Marc Maron and Jim Gaffigan, and has released two albums, Yelled at by a Clown, and last year’s Full Time Magic, which also debuted an hour-long special on Comedy Central, something the rising comic counts as a culmination of more than a decade of navigating his career. A self-proclaimed fan of the Titans and all things Vanderbilt sports, Bargatze’s southern upbringing, despite not getting his comedic start in the south, certainly influenced his delivery, demeanor, and worldview, and, though he’s not particularly branded as such, his style comes across fairly family friendly (he even took part in Jimmy Fallon’s Clean Cut Comedy Tour). Local or not, Nate’s friendly, obversataonal, and hilarious routine is sure to delight at Bonanroo, so add him to your must-see list.

Minus The Bear, Cursive and Girl In A Coma at Cannery Ballroom Tonight.