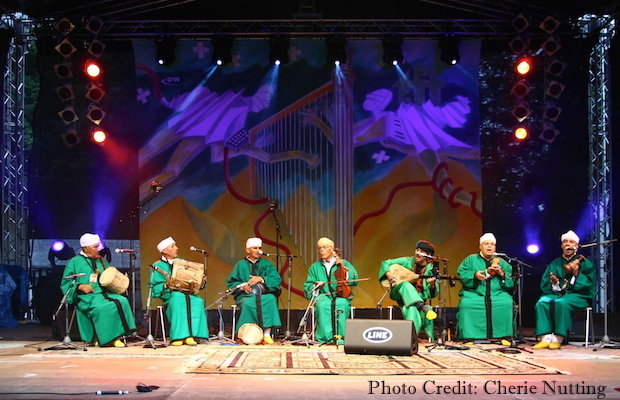 One of the joys of Bonnaroo is exposure to a variety of novel performances that one would never have caught in any other environment. For a lot of Western listeners, today’s Bonnaroo Band of the Day, The Master Musicians of Jajouka led by Bachir Attar certainly fits that description. The group was formed by the Attar family in the Jajouka village in northern Morocco and can trace its roots all the way back to at least 800 BC. Throughout that time, the group has played very traditional Sufi trance tunes. This incarnation of the group formed back in 1950 by current bandleader Bachir Attar’s father, Hadj Abdessalem Attar, catapulted the band into the international spotlight by becoming involved with recordings featuring Western artists such as Brian Jones. In 1982, the group was taken over by Bachir Attar, who has continued in his father’s tradition, recording with artists such as the Rolling Stones and Bill Laswell. Furthermore, the group (which currently features 13 members including Attar) has toured heavily around the world in recent years, particularly relying on the festival scene to perpetuate their tunes.

Since Attar took control over the group back in 1982, the Master Musicians of Jajouka have recorded five studio albums. Interestingly enough, the last studio album they recorded, 2013’s The Road to Jajouka, features a number of artists you’ve probably heard of, including Flea and DJ Logic. The group has also been responsible for a number of film soundtracks in that time. All in all, this group has been a consistent force in the traditional trance genre for nearly 65 years, and over the course of that time they’ve really developed their chops as musicians. When listening to this group, it’s hard not to pick up on the intense spirituality present. If you’re a fan of acts like Tinariwen that combine traditional Eastern musical motifs with modern day techniques, then the Master Musicians are right up your alley. This group will certainly be one of the most unique at Bonnaroo this year, and definitely will provide an interesting change of pace for all who attend.