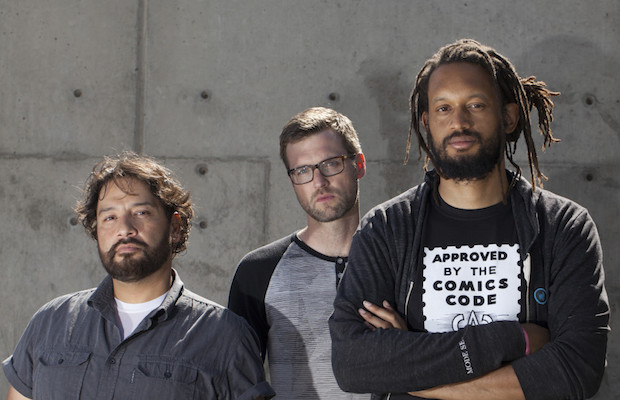 Alternative hip hop outfit Flobots are bring their live band to drop some knowledge on the crowd at City Winery on Halloween night (Monday, Oct. 31), and tickets to the all ages show are currently on sale here. It’s listed as as standing room only, which suggests it’s going to be packed, so don’t sleep on this one, but while you’re here, you might as well click on after the jump for your chance to win two free tickets. Take some time to learn more about the eclectic performers, and start plotting your Halloween costume, because chances are most people will be in full character for the duration of the show.

Formed in Denver, CO, around 2000, Flobots’ nucleus consists of two emcees, Jamie “Jonny 5” Laurie & Stephen “Brer Rabbit” Brackett, who write progressive, socially conscious rhymes that will leave you thinking about more than pretty girls, fast cars, expensive jewelry, and over-priced liquor. Throw in a live rhythm section, plus a classically trained violist, and you the have the recipe for something truly unique. The group achieved some level of mainstream success with their 2007 LP, Fight with Tools, thanks in large part to the smash hit single “Handlebars,” which was all over modern rock radio at the time (the record went on to peak at number 15 on the Billboard charts). Two more studio albums, and a live LP have followed, but it’s been a few years since they’ve put out a record. Word is a new record, NOENEMIES, is slated for release in 2017, but, given the troubling times in our country right now, the band decided to embark on a “Your Life Matters” tour now to spread their message of unity and social consciousness. The band’s ability to bounce from symphonic, rock-infused anthems into stripped-down, string-laden breakbeats has helped the band earn a reputation for a killer live show, and, once you throw in all the unavoidable Halloween shenanigans for their Nashville date, you’re are almost guaranteed to have an amazing time. Set your plans now people, and get ready to get spooky.

Winner will be announced Friday Oct. 28, and will receive one pair of tickets. Good luck!