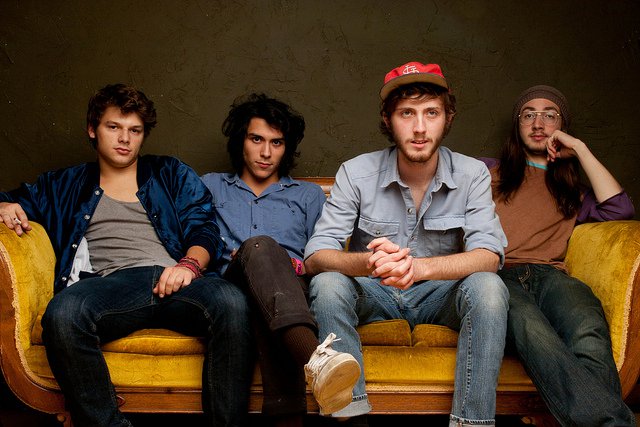 Get off your fat ass! You’ve had two days to shake your turkey day hangover, and you’ve no doubt slipped into a few leftover-induced food comas, but tonight it’s time to check out this writers favorite new(ish) local band; The Kingston Springs. Their self-titled debut full-length has been out for over a year now, but the fervor surrounding Nash’s new hometown heroes is just starting to percolate. We most recently told you about a great show they played warmup for here, but tonight the boys from just down the road are the headliners. Read on for more info or just grab $10 tickets now. Doors open at 8, so get there in time for fellow Tennessee natives Ri¢hie and Faux Ferocious.

Hailing from (yup, you guessed it) Kingston Springs, TN, the four handsome gents pictured above grew up with Music City just 30 minutes east on interstate 40. As a result, their influences are numerous and varied. They’ve been playing their brand of heavy blues, folk, Rocky-Top surf rock for over four years, and their massively sick debut album can be purchased here. This show will be a great opportunity for them to make an even bigger splash then they have already and possibly propel them into a spot at, dare I say it so soon, Bonnaroo (and, hey, they’ve certainly had no shortage of festival appearances over the past few years)! Check out a cool acoustic version of their smash single “Weight of This World” below and go to the show! $10 is a steal, trust me.

We already told you everything you need to know about local wildman Ri¢hie here, and even showed you one of the most awkward interviews we’ve ever seen. But, if you’re still not sold, check out the vid for his single “No, no Yeah” below.

Local via Knoxville, this surf rock, pop punk quartette sound to us like what Pavement would have sounded like if they came out today. Their Facebook page lists their interests as ‘pornography’ and ‘beer,’ and their influences as ‘old western movies.’ Get a taste of their sound below.

The Kingston Springs, Richie and Faux Ferocious perform TONIGHT at 12th & Porter. Doors are at 8 p.m. music starts at 9 p.m. Tickets are only $10.