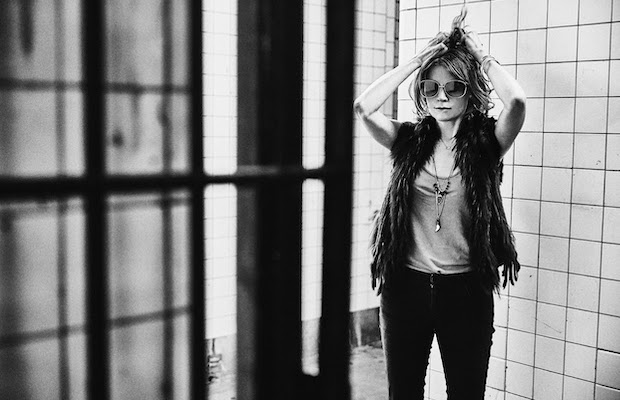 Songwriter and filmmaker Kate Tucker has been a treasure to the Nashville indie scene since moving here from New York in 2011. We’ve always admired the way Kate captures massive, sweeping feelings and events without leaving behind the intimate, day-to-day moments. She’s created music here while experiencing historic natural disasters, rich musical collaborations, changing city landscapes and now, a pandemic. We’re grateful to premiere her single “A Little Bit of Love” ahead of the release of Singles Club, a series of songs full of life and energy.

“A Little Bit of Love” pulls us in with a hooky nursery-rhyme melody and an affirmation to use in the face of everything going down in our world right now. Written and produced by Tucker and Gregory Lattimer (Albert Hammond Jr, The Strokes), Tucker says, “It felt like my twenties, living in Brooklyn, walking across the Williamsburg Bridge in the summertime to go see my friends’ band on the Lower East Side, that sense of anticipation when the city lights come on across the water and everything is just about to happen. It doesn’t matter who you are or where you come from, or how much money you have in your pocket — there’s a magic to it and everyone feels alive for at least one moment. That’s what New York is to me. Even though those days were rough and I was scrapping, I always somehow had enough and that’s where I learned that a little bit of love goes a long, long way.”

Growing up in a family of truck drivers, Tucker became acquainted with the American road from an early age. A sense of place, space, home, and the vast unknown continues to inform her work in both mood and lyric. Perhaps this frequent travel set in motion what would become her own musical journey, cutting her teeth in Akron rock clubs, moving to France to busk in the streets of Paris, setting off for Seattle to start a band, only to hit the road again for NYC to finally land in Nashville, Tennessee.

Tucker is currently in Nashville writing for her new record, and directing Comeback Evolution, a documentary on the life and work of artist Walter Delbridge. Her full length LP and the film are both set for release in 2021. For now, listen to “A Little Bit of Love” below.