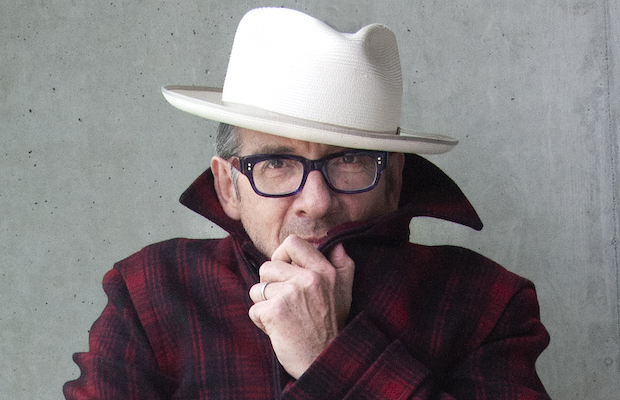 One of the most celebrated musical artists of the last four decades, and one of England’s most essential exports, rocker Elvis Costello came up in the ’70s as part of London’s pub rock scene, releasing a trio of excellent early LPs at the end of the decade which positioned him as an influential and beloved figure in the burgeoning punk and new wave movement. By the ’80s, Costello and his backing band The Attractions (who split in ’86, prompting the singer-songwriter to forge ahead solo, with the occasional reunion in the decades since) were beginning to experiment in broader genre-territory, eventually moving towards the more rock and pop sound he’s since adopted, but dabbling in everything from country to post-punk to jazz along the way. World famous, critically adored, and award winning, Costello remains as vibrant as ever, and though he’s spent the last decade touring more than recording, last year saw the release of the singer’s impressive 30th LP, Look Now, met with widespread critical acclaim.

No stranger to Nashville, Costello has made his way to Music City several times in recent years, for conventional shows, special events, and more stripped-down affairs. Upon his return to The Ryman tonight, Nov. 4, Costello and his backing band The Imposters ask you to “Just Trust” them to play a fan-geared, career-spanning set of favorites and new tunes, set against the backdrop of Nashville’s most famous venue. Whether you’re a diehard or casual fan, any chance to see Elvis Costello live is always a treat, and a handful of tickets for this evening still remain right here!

Elvis Costello & The Imposters will perform tonight, Nov. 4 at The Ryman Auditorium. The show is all ages, begins at 7:30 p.m., and tickets are available to purchase for $55-75.