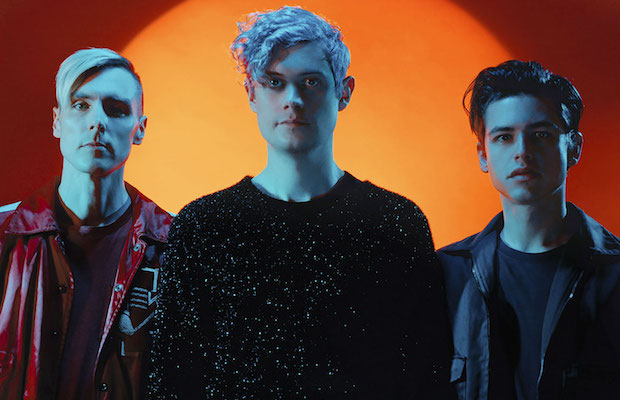 One of the most buzzworthy new acts to emerge from the indie scene in the past few years, LA (by way of Brooklyn) cosmic alt/indie pop trio Dreamers shot to acclaim with their 2016 debut This Album Does Not Exist, and just dropped an incredibly worthy followup, Launch Fly Land, earlier this year. Currently out in support, the group return to town for their biggest Nashville headliner yet Nov. 3 at Topgolf’s The Cowan, supported by a perfectly suited lineup of similarly eclectic and buzzworthy artists on the rise, Arrested Youth and LA indie rockers Irontom. An incredibly cool bill from top to bottom and a must-see for fans of poppy, genre-bending and artsy indie rock, tickets are still available right here! Or, if you’d rather try your luck, we’re also giving away a pair of tickets to one lucky fan! Read on for more about the show, and enter for a chance to win below.

Hailing from Seattle and Maryland, formed in Brooklyn, and now based in Los Angeles, alt/indie pop trio Dreamers have had one of the buzziest career ascents of the past few years. Evolving from a prior grunge outfit, Motive, featuring frontman Nick Wold and former drummer Chris Bagamery, Dreamers formally came together with the addition of bassist Marc Nelson (and, later, drummer Jacob Lee Wick), honing their fusion of classic punk, artsy indie pop, grunge rock, and cosmic alt rock, writing their early work at a time Wold was living in a windowless Brooklyn practice space. Drawing swift buzz for first single “Wolves (You Got Me)” and their eponymous debut EP in 2014, the trio soon relocated to LA, attracting national press, radio play, and beginning to tour, all the while honing the material that would become their 2016 debut full-length, This Album Does Not Exist, released just a few months after a second EP, You Are Here. In the following three years, Dreamers have exploded out of the underground to become a buzzy rising force in the indie world, sharing the stage with acts like Weezer, Catfish and the Bottlemen, All Time Low, Atlas Genius, The Mowgli’s, The Vaccines, Walk the Moon, Stone Temple Pilots, and many more, while also appearing at festivals and attracting an ever-growing and passionate fanbase, thanks to their slick, cool, modern yet timeless, pop accessible work, which has only become more honed and cohesive with each passing work. After a couple more EPs, Dreamers returned with their second LP, Launch Fly Land, earlier this year, packing even more huge hooks, emotional resonance, and confident and cool indie pop prowess, making their return to Nashville for their biggest local headliner yet, after playing rooms like The End and Exit/In in recent years, no surprise!

Like Dreamers, buzzy musical newcomer Arrested Youth pulls from an eclectic mix of music from the past to find a sound that feels contemporary, channeling alternative, pop, hip hop, indie rock, and more. The musical alias of Louisville, KY native Ian Johnson, the project’s roots trace back to the multifaceted artist’s teenage years, where, citing influences like Kid Cudi and Red Hot Chili Peppers, he began writing lyrics and tried his hand at early mixtapes and a debut EP, all of which garnered some moderate buzz online. Putting his musical ambitions on hold, Johnson opted to go to college for business, promptly accepting a lucrative corporate job upon graduation in 2016. While traveling the country for his new career, Ian, jaded and dissatisfied by plugging into the would-be American Dream, began to write music once more, debuting as Arrested Youth with 2017 single “All My Friends Are Robots” and followup “A Painting in Paris,” garnering buzz and landing on big playlists ahead of last year’s debut album Fear. Before he’d ever played a show, Johnson landed a tour opening for breakout rocker Yungblud, moving from his parents’ house in New York to LA, where he put together a band. Still a relative newcomer, the whirlwind of unexpected attention and fast-moving success has made Arrested Youth a fascinating and worthy artist on the rise who we strongly suspect will become an even bigger mainstream fixture in the next few years; don’t miss him!

Helmed by guitarist Zach Irons and singer Harry Hayes, sons of former Red Hot Chili Peppers and Pearl Jam drummer Jack Irons, indie rockers Irontom formed in 2012 in their native Los Angeles. Combining elements of post-punk and prog, psychedelic and funk rock, the group, like the rest of the bill, pull from the past to assimilate into the present, drawing buzz for their early EPs The Loose and The Nitro in 2012, and 2013, as well as their high energy live shows. For their first full-length, 2017’s Partners, the band tapped AWOLNATION frontman Aaron Bruno to produce, drawing even more acclaim and propelling the band to more mainstream buzz. Perfectly primed to open this show, Irontom’s latest Music City stop comes just months after their new EP, Kid Midnight!

Winner will be announced Friday, Nov. 1 at 12 p.m. CDT, and will receive one pair of tickets. Good luck!

Dreamers, Arrested Youth, and Irontom will perform Sunday, Nov. 3 at The Cowan at Topgolf. The show is all ages, doors open at 7 p.m., and tickets are available to purchase for $17-20.