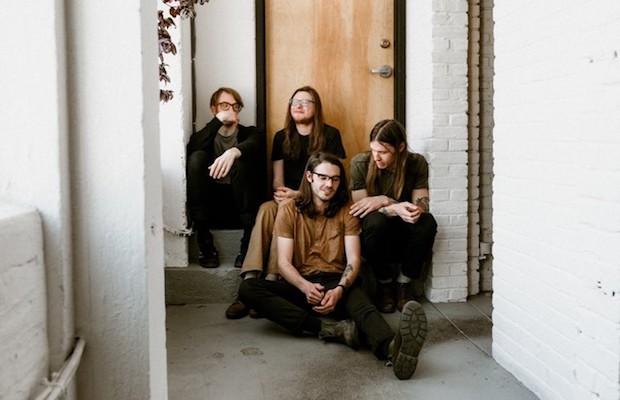 What originally began as a sort of songwriting exercise to get over a hump writing for the  beloved emo/indie punk group he co-fronts, Modern Baseball, Philly musician Jake Ewald’s solo songs soon gave way to a full album’s worth of material, and new project Slaughter Beach, Dog was born. 2016 debut Welcome was warmly received, and, the following year, after announcing that Modern Baseball would be taking an indefinite hiatus, Ewald really came into his own as Slaughter Beach, Dog with an even better followup, Birdie. More introspective and indie, the project isn’t a huge leap form Modern Baseball, but, certainly, sees Jake fully adopting his own voice and sensibility, playing more with genre and writing without his other group’s built-in expectations. Now formally fleshed out with a backing band, and a regular touring fixture in the indie punk scene the past few years, Slaughter Beach, Dog returned just a few weeks ago with a highly-anticipated third album, Safe and Also No Fear, which is without a doubt the project’s most cohesive and fully-realized work to date, and the sound of a songwriter who’s always had an incredible knack for crafting earnest, emotionally-charged compositions becoming even more wise and focused with age.

Tonight, Aug. 23, Slaughter Beach, Dog will bring their thoughtful and confessional tunes to The End, along with similarly earnest and resonant Philly outfit Cave People, and Nashville’s own Air Ralley. Fans of low-key, raw, accessible, indie, punk,S and emo will want to make this a priority (especially if you’re not already catching Pedro the Lion and mewithoutYou across town). Tickets are available here while they last, and you can listen to all the perfumers below!