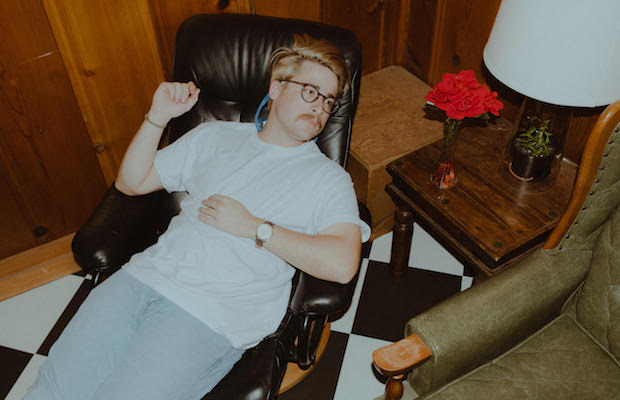 Today, we’re thrilled to bring you an exclusive premiere of a brand new music video for “Real,” the opening track from last year’s eponymous release. “I wanted this video to encapsulate the lines of real and fake and the chaos of finding that balance,” Waller explains, “The video starts as a fairly typical music video. As the song progresses and the guitars start sizzling, the video slowly unfolds into a psychedelic disarray of green screens and whirling colors.” Notably, Waller portrays a multitude of characters (and members of his own backing band) in the increasingly surreal and visually eye-popping spot, which was directed by Thomas Costner.

On the background of the song, a brisk, hood-laden high-point of his latest LP, Clayton tells us, “Vulnerability can be rewarding. We are able to connect to each other when we let our guard down and take off our masks. But where’s the line? Can one be too real? Imagine a world where no one had anything to hide: Everything is already on the table. It would be kind of freeing, wouldn’t it? But ultimately, it would probably end in destruction – like a Black Mirror episode. For vulnerability to truly work, there’s got to be trust involved. And I don’t even trust myself!” That fairly earnest personal subject matter, juxtaposed with infectiously catchy and light musical arrangements perfectly sums up Rock Eupora’s aesthetic, and is captured perfectly in this new video for “Real” – watch it below!

A regular fixture of the local scene, you can also catch Waller and his band of backing players Saturday, July 20 with Mountains Like Wax and Brother Moses for free at the Cambria Hotel’s True Music Room (details here)!