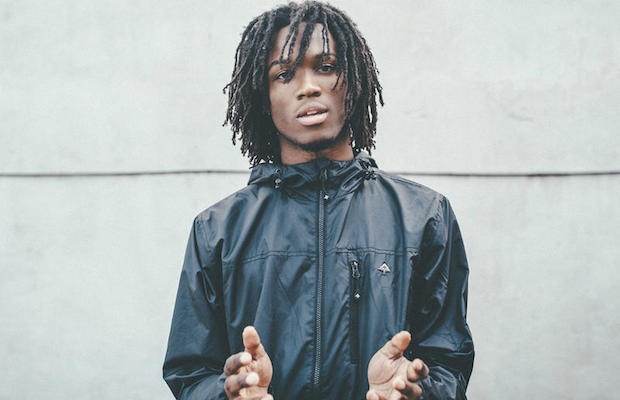 Hailing from west side Chicago’s Austin neighborhood, rising hip hop talent Saba hasn’t quite yet experienced the level of fame of some of his Chi City peers and cohorts like Chance the Rapper and Noname just yet, but with a sharp flow, technical approach, honed and thematic lyrical prowess, and deeply personal and substantive style, he’s fast becoming a rising star of the scene, and something of a refreshing antidote (much like Chance) to the more bombastic, vapid, shallow, and disposable wave of young rappers who’ve come to dominate the mainstream in recent years. Graduating from high school at 16 with a near-perfect GPA before enrolling for a few semesters at Columbia, Saba, born Tahj Chandler, got his musical start young, influenced by his r&b singer father, known simply as Chandlar, as well as some of the region’s great hip hop artists like Kanye West and Lupe Fiasco. After co-founding his musical collective Pivot Gang with a few family members and close friends, Saba made a name for himself in the neighborhood early on, performing at open mics at a community library organized by nonprofit YouMedia, a teen-geared poetry-rooted series that also fostered breakouts like Vic Mensa and Chance. Around that time a still teenage Saba released his first two mixtapes, Get Comfortable and Comfort Zone, and guested on Chance the Rapper’s gargantuan breakout mixtape Acid Rap, appearing on the tune “Everybody’s Something.”

Now 24, the past few years for Saba have been both artistically transformative and personally sobering, as yet another Chance guest spot, on “Angels” on the rapper’s Grammy winning Coloring Book, brought a massive wave of new attention ahead of his debut LP, Bucket List Project, a conceptual, jazz and neo soul infused, vibrant and uplifting personal triumph, featuring guests like Noname, Twista, Jean Deaux, and Smino. Mere months after the LP’s release, however, Saba’s cousin and Pivot Gang co-founder John Walt was tragically murdered on a Chicago train, an event that would shake the young rapper’s outlook and color his more recent work. Last year’s Care for Me, Saba’s most critically-acclaimed release yet, and frequently cited as one of the best albums of 2018, took a significantly more somber turn, navigating grief, angst, depression, and loss, further asserting the rising Chicago MC as one of the most substantive and meaningful new rappers on the scene. Though his style is thoroughly contemporary, Saba’s care for his craft and artistic approach feels like a callback to hip hop’s more effortful and meticulous days, and his show, shaped from several years on the road sharing the stage with some stellar artists, is every bit the exuberant and uplifting experience as his friend Chance’s. It’s a lighter year for truly great hip hop at Roo, making Saba’s late night Thursday set all the more essential for your weekend plan.