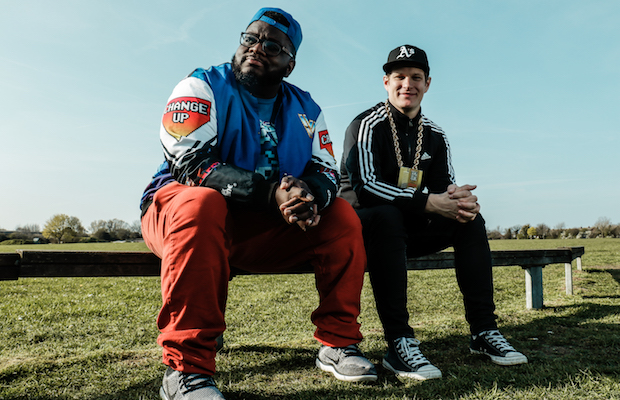 Nerdcore, nerd rap, laptop rap, whatever you want to call it, there’s no denying that both MC Lars and Mega Ran have been instrumental figures in their flourishing hip hop subgenre now for around two decades. Hailing from Berkeley, Calif., Lars, equally a fan of classic literature as modern pop culture, forged his unique sound by fusing elements of post-punk and emo to inform his sharp, smart, and often funny style. Iggy Pop-sampling 2006 single “Download This Song” and Piebald-sampling “iGeneration” might be among his best known tunes, and, for many years, he’s weaved between the punk scene at events like Warped Tour, prestigious events like TEDx, and the more traditional hip hop scene, flexing his legitimate musical chops and polished delivery. Mega Ran, formerly known as Random, came up in the underground hip hop scene in Philadelphia, his sound and style informed by a love of video games (hence the stage name), pop culture, and chiptunes. Formerly an educator, Ran retired to pursue music full-time a few years back (and has also branched out into other areas such as podcasting), and, like Lars, has helped influence the nerdcore scene as a whole, and has benefitted from its rise in recognition.

Longtime friends and frequent tourmates and collaborators, it seemed only a matter of time that Lars and Mega Ran would eventually team up for a record, and they’ve finally done just that, crafting an epic, literary-themed, entertaining and educational collaboration LP, The Dewey Decibel System, covering everyone from Edgar Allan Poe to William Shakespeare to Ta-Nehisi Coates, funded entirely through Kickstarter, and set to arrive June 7. In celebration of the forthcoming release, the rappers are in the midst of run with similarly long-running and beloved artists MC Frontalot and Schaffer the Darklord they’ve dubbed the Mount Nerdcore Tour, which brings the stacked line to Nashville’s own True Music Room and Bar and the downtown Cambria Hotel tonight, May 10!

MC Frontalot, who also guests on The Dewey Decibel System, is, like Lars, a pioneer of the nerdcore scene, with his musical roots also tracing back to the turn of the millennium, and breakthrough attention coming a few years later in the early ’00s. Often credited as the originator of nerdcore, the now-Brooklyn based Frontalot was embraced early on by internet culture, geeks, and gamers, appearing at events like Penny Expo, and eventually even on television through G4 and TBS series King of the Nerds. Needless to say, he’s an artist more synonymous with nerdcore than any other, and remains one of the most prominent fixtures of the scene. Also New York based and perhaps the biggest oddball of the group, Shaffer the Darklord also got his start nearly two decades ago, combining his own nerdy interests and early rap pursuits, and fusing his sound with elements of dark metal and comedy (every artist on this lineup has comedic associations, but Shaffer leans into it the most). No doubt an interesting addition the nerdcore scene, Shaffer’s niche is an interesting one, and his inclusion helps make for about as well rounded a nerdcore lineup as possible. This is, without a doubt, a must-see show for fans of nerdcore, and a stellar introduction for anyone curious about the scene. It’s all ages, and tickets are only $15 right here. Don’t miss out!

MC Lars, Mega Ran, MC Frontalot, and Schaffer The Darklord will perform tonight, May 10 at the Cambria Hotel’s True Music Room and Bar. The show is all ages, begins at 8 p.m. (doors at 7:30 p.m.), and tickets are available to purchase for $15.

White Lung Premiere Live Video for “I Believe You”