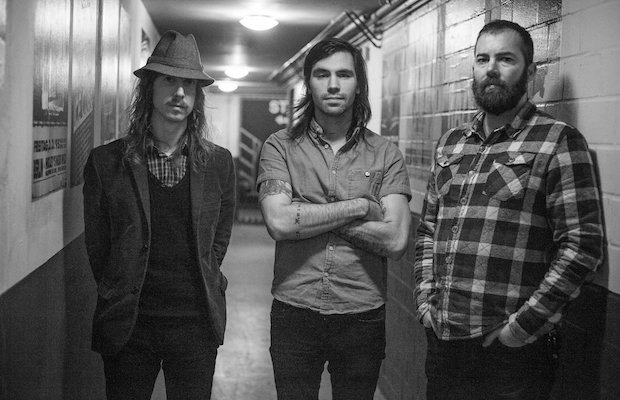 Now 15 years into their existence, instrumental Chicago based trio and longtime staples of the post-rock and post-metal scene, Russian Circles are set to return to Nashville for the first time since an unlikely but awesome Ryman appearance in support of Mastodon in 2017, for their first Music City headliner in as long as we can remember tonight,  Feb. 26 at The Basement East with buzzy Florida hardcore outfit Gouge Away. Fans of punk, metal, instrumental music, and resonant and heavy jams will want to make their one of February’s last must-see outings, and tickets are still available right here! Read on for more about the show.

Instrumental post-rock and post-metal outfit Russian Circles first formed 15 years ago in Chicago, initially founded by former Dakota/Dakota guitarist Mike Sullivan and bassist Colin DeKuiper, and soon rounded out by Riddle of Steel drummer Dave Turncrantz (with ex-Botch/These Arms Are Snakes bassist Brian Cook replacing DeKuiper in ’07, between their first and second album, Enter and Station). Critically lauded and long-time darlings of the underground rock scene, the band have spent over a decade exploring new and unique tones and sonic palettes, pushing their style into new genre realms and resonant, intense, and mesmerizing spaces across six-full length albums, most recently 2016’s remarkable and inspired Guidance. Having toured with the likes of Minus the Bear, Deafheaven, Mastodon, and more, the group’s appeal has always straddled the line between a more conventionally metal crowd, fans of complex and genre-bending indie rock, and a more niche heavy, instrumental music fanbase, and thanks to their engaging and dynamic live show and road worn stage presence, they’ve been a well-regarded touring fixture for years. With the release of new music imminent, Russian Circles’ first headlining Nashville show in years should be a must-see on your February calendar.

Rising stars of the punk and hardcore scene, Ft. Lauderdale, Florida’s Gouge Away only formed in 2012, but have already received widespread acclaim for their first two albums, 2016’s , Dies, and last year’s Burnt Sugar. Anchored by dynamic vocalist Christina Michelle (unlike Russian Circles, they’re not instrumental, nor are they especially metal), the band found an early fan in Touché Amoré’s Jeremy Bolm, soon touring with the group, before early runs with the likes of G.L.O.S.S. and Paint It Black. After nabbing a deal with Deathwish Inc., the band recruited Bolm to co-produce their sophomore effort, with mixing from Deafheaven’s Jack Shirley, landing them on numerous year-end lists last year, and ongoing touring with bands like Drug Church. Hard-hitting, old school in their hardcore, post-hardcore, and noise rock influences, and socially and politically conscious, Gouge Away are a must-know rising act for fans of heavier punk, and though they’re sonically district from Russian Circles, they should be more than up to the task of warming up the stage; don’t be late!

Russian Circles and Gouge Away will perform tonight, Feb. 26 at The Basement East. The show is 21+, begins at 8 p.m. (doors at7 p.m.), and tickets are available to purchase for $17.