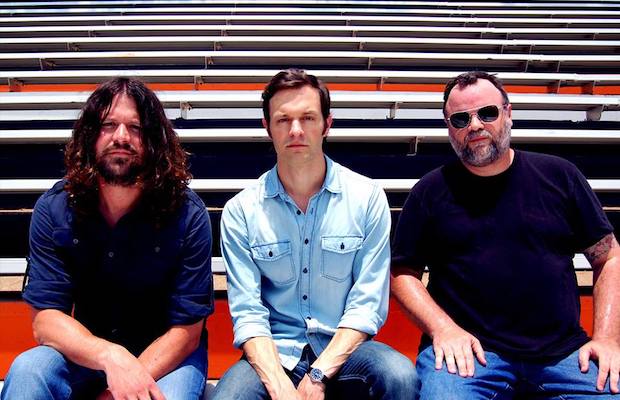 Part of the buzzed about, breakout Murfreesboro rock scene of the ’90s, local power pop trio The Katies never quite managed to get their due, despite releasing a critically acclaimed, major label backed debut in ’98, and and eventually relocating to Los Angeles, where they ultimately disbanded near the start of the millennium. After years of working on other projects and enduring their own personal journeys (as well as briefly returning in the mid-’00s), the band felt compelled to reunite in 2017, both celebrating their all-too-short legacy and looking forward with the promise of new music. They’ve played a few shows since, but after releasing a great new single, “White Light,” late last year, it feels a particularity cool time to see this classic Nashville act in action when they perform Jan. 19 at Exit/In with buzzy Athens transplants Cusses. Tickets are still available right here, but we’re thrilled announce that we’re also giving away a pair of tickets to one lucky fan! Read on for more about the show (and get up to speed on The Katies if you don’t already know ’em), then enter for a chance to win below.

While younger fans dialed into the Nashville area rock scene might only be familiar with the breakout bands of the last decade, or even the handful that achieved broad attention in the ’00s (Kings of Leon and Paramore among the most commercial visible), if you were dialed into Music City and its surrounding radius in the ’90s, you surely know that Murfreesboro boasted a flourishing musical movement that gave other acclaimed college rock towns like Athens and Austin a run for their money. Centered around MTSU’s fantastic music industry and recording programs, and fostered by beloved former ‘Boro indie label  Spongebath Records, acts like The Features, Fluid Ounces, and, most prominently, Matt Mahaffey’s sElf, brought national attention and major label interest to an otherwise unassuming, Nashville adjacent college town. Formed in 1996, The Katies were a short-lived but prominent part of this scene, releasing their one and only eponymous full-length in 1998, through both Spongebath and major label Elektra. Formed initially by guitarist Jason Moore and bassist Gary Welch, the group found a permeant lineup and a power pop sound, drawing cues from classic rock and contemporary alt and grunge, once Moore convinced his brother Josh to move to Murfreesboro and join the band on drums straight out of high school. Met with swift local buzz, and, after the aforementioned label interest and record release, national critical attention, the band fell short of ever quite breaking through to the mainstream in a major way, touring the southwest intermittently before parting ways with their labels and opting to move to Los Angeles in ’01 to record a new EP with Mahaffey. Welch soon departed home for Tennessee, however, leaving the Moores to pursue a new project, WhenBreathingStops, and bringing The Katies to a halt, albeit briefly reuniting between ’05 and ’06 once all three members returned to Nashville again, before disbanding for another decade. Prompted by demos and tapes of song ideas that chronicled a real-life struggles with substance abuse, relationships, and loss, Jason felt compelled to rebuild the band as an outlet to express his latest personal journey, with The Katies mounting their unexpected return in 2017, followed by a handful of local shows and even a new single, “White Light,” late last year. Both an important fixture of Nashville’s musical past, and an exciting new addition to the diverse scene of its present, whether you’re looking to revisit or discover this exciting footnote in Music City history, we urge you to give The Katies a spin!

We’ve been fans of indie/post-rockers Cusses since their days of calling Athens home, but we’re even more thrilled that the group, who have roots in Los Angeles and New York, now reside in Nashville. Anchored by dynamic vocalist Angel Bond, the band expertly pull from punk, psych rock, glam, and hardcore, proving hard to pin down but endlessly enjoyable, and fueling an electrifying live show. Leaping onto the scene in 2012 with a self-titled debut, the band amassed a ton of regional buzz (and even an opening gig for Bon Jovi) in the subsequent years, pausing for a bit to take a breather, before returning last year with phenomenal new album Golden Rat. Cusses are definitely sonically distinct from The Katies, but just as exciting a live show (and a fresh, up and coming juxtaposition form The Katies’ established, legacy prestige). Show up early, or you’ll be sorry.

Winner will be announced Friday, Jan. 18 at 9 a.m. CST, and will receive one pair of tickets. Good luck!

The Wans, The Inscape, Penicillin Baby | The High Watt | Tongiht In Nashville