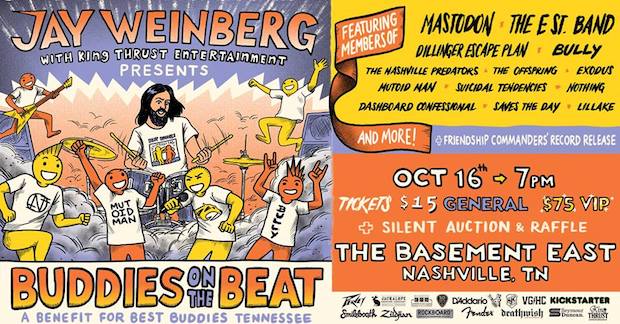 If you’re looking for the most rock and roll for your buck, while supporting a great cause to boot, there’s no better place to be tonight, Oct. 16 than The Basement East, where accomplished drummer and Nashville resident Jay Weinberg will host a star-studded benefit concert called Buddies on the Beat. With 100% of proceeds set to benefit the Tennessee chapter of wonderful nonprofit Best Buddies, tickets are available in regular and VIP options here, and the event will also include a silent auction and raffle.

Currently a member of famed heavy metal outfit Slipknot, Weinberg, who’s the son of long-time Bruce Springsteen drummer (and former Conan bandleader) Max Weinberg, has previously drummed for Against Me!, Madball, and even The Boss himself. Tonight, he’ll host a killer evening of covers, featuring rotating players from some seriously talented and genre-spanning acts, including Troy Sanders of Mastodon, Max Weinberg and Garry Tallent of The E St. Band, Ben Weinman of The Dillinger Escape Plan, Alicia Bognanno of Bully, Craig Smith of Nashville Predators, Pete Parada of The Offspring, Jack Gibson of Exodus, Steve Brodsky of Mutoid Man, Zakk Sandler of Falling In Reverse, Domenic Palermo of Nothing, Dane Poppin of Dashboard Confessional, Arun Bali of Saves The Day, Nico Santora of LILLAKE, Rafay Nabeel of WITHERED, Marcus Wanner of Slider, Leticia Wolf of The Dead Deads, Dakota Denman of Denman, and more.

The show will also include a special record release set from Friendship Commanders, and given the staggering amount of talent involved, we expect plenty more surprises. This would be an insanely cool, can’t-miss show under any circumstances, but given that it’s for a good cause, you won’t find a better night of music this evening. Head here for more details!