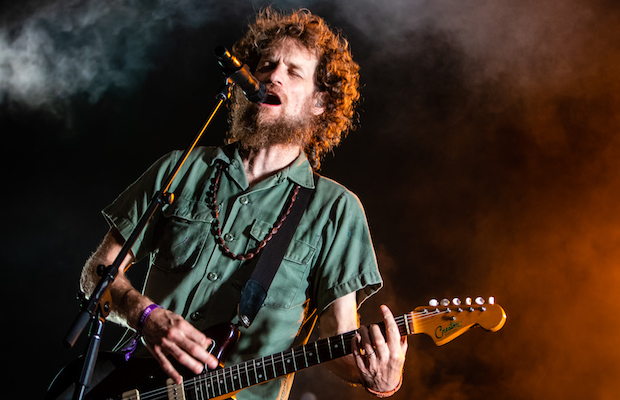 Live on the Green

Kicking off its tenth season, the annual Live on the Green free festival series returned this week to Public Square Park, setting the bar high for yet another exciting year. With the returning talents of Dispatch, after being rained out last year, along with local favorites The Wood Brothers, buzzy rising group Mt. Joy, and newcomers Roscoe & Etta, week one, now expanded to four slots up from three, featured largely touring acts, but ones very familiar and dialed into the Music City scene, and if the packed and diverse crowds were any indication, they were a wonderful fit for an inaugural show. As it has for several years, Live on the Green will run for four Thursdays this year, ending with an epic three-day affair extending across two stages through the final Saturday and Sunday. We have performers like Jimmy Eat World, Dr. Dog, Cold War Kids, X Ambassadors, Trampled By Turtles, Matt and Kim, and Car Seat Headrest to look forward to, but, before we preview the exciting weeks ahead, take a look at our recap and photos from week one below!

I’ve been attending Live on the Green now for seven seasons, over two-thirds of its run, and covering for six for No Country. It’s been a thrill to watch it grow, and to see so many great bands pass through, often to return again a few years later to bigger crowds and wider success (this season is no exception). Rarely does the fest cancel for weather, but an especially bad storm last year forced some of the final weekend to a halt, unfortunately including a planned stop from touring act Dispatch. It seemed fitting, then, that they return to help kickoff what promises to be a stellar 10th season. At this point, LOTG runs like a well-oiled machine, and after arriving to a modest but eager early crowd, scoping out this year’s crop of venders and food trucks, and situating in my spot by the stage, I felt a rush of excitement thinking about the weeks ahead. 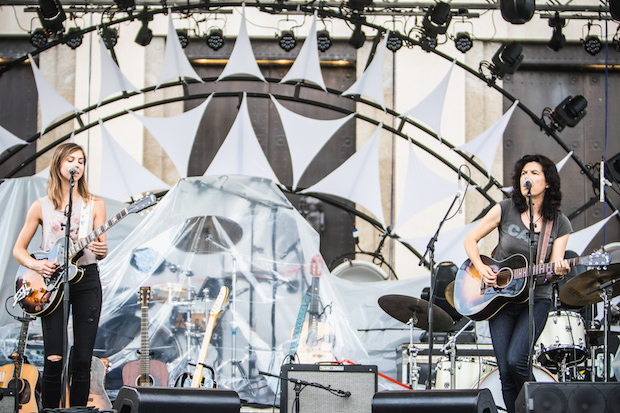 Live on the Green is certainly a great place to see big names and returning favorites, both local and beyond, but it’s an equally great way to discover up and coming acts. Hailing from Los Angeles, Roscoe & Etta are new to the scene- so new that they barely have any music out, with a debut slated for this fall. Still, first single “Broken Headlights” was an excellent indication of just what to expect, and their their individual pedigrees and impressive solo accompaniments left us incredibly excited to check out Maia Sharp and Anna Schulze’s new duo.

The threat of bad weather seemed to subside just as the group took the stage, met with a still-arriving but enthusiastic early crowd. Armed with only their guitars and no accompanying players, Roscoe & Etta stood in front of plastic-wrapped backline to deliver a pleasant, harmony-rich performance, adopting a low-key, accessible pleasantness and clear polish from years of performing with other projects. Trading off leads, their voices and playing styles proved a perfect compliment- sometimes songwriter duos turned bands can feel a little lacking in identity, but not the case here- and while they mentioned trying out some new material, it was all new and exciting to me.

With a cool demeanor and pleasant banter- Sharp even dropping news that she was planning on moving to Nashville soon- Roscoe & Etta felt like a band who’ve been around a lot longer than their short run would suggest, and by the time they reached the end of their all-too-short set, closing with “Broken Headlights,” I was won over as a fan, eager anticipating their inevitable Nashville return. Lightning 100 certainly has a pulse on the best of what’s best, and Roscoe & Etta are no exception. 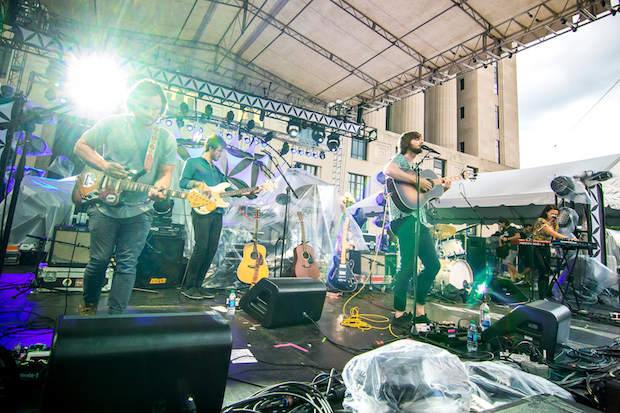 Despite an impressively quick changeover, dark clouds had descended by the start of Mt. Joy. Still, we managed to miraculously avoid rain throughout the set and, combined with the setting sun, the gloomy backdrop felt like a nice juxtaposition to their more vibey, introspective, and propulsive style. A band I’ve been following for awhile- even if I didn’t spend as much time with last year’s debut as with their buzzy early singles- they were the group I was most looking forward to on night one, and they wholeheartedly delivered.

Though initially a duo, Mt. Joy have solidly worn into their full band format, and the swift success of the last couple of years has left their sound polished and their live show particularly honed. Live on the Green always attracts a number of casual showgoers, but it was clear a lot of fans, particularly younger ones, knew Mt. Joy well, and crowded into the front, angling to get a close glimpse and enthusiastically singing along with familiar cuts and a couple of new tunes.

A hard act to pin down, Mt. Joy felt both at home on this week’s lineup, and a band in contrast to it. Though they certainly have a prevailing folk element, they largely stay anchored to indie rock territory, especially thanks to singer Matt Quinn’s raw and intense delivery, and with the added keyboard prowess of Jackie Miclau, they often took on a soulful, retro bent, even at one point wavering a particularly jammy interlude into Bill Withers r&b classic “Ain’t No Sunshine.” I was already a fan, but left even more impressed than expected, fully anticipating My. Joy to remain among the highlights of the entire season. 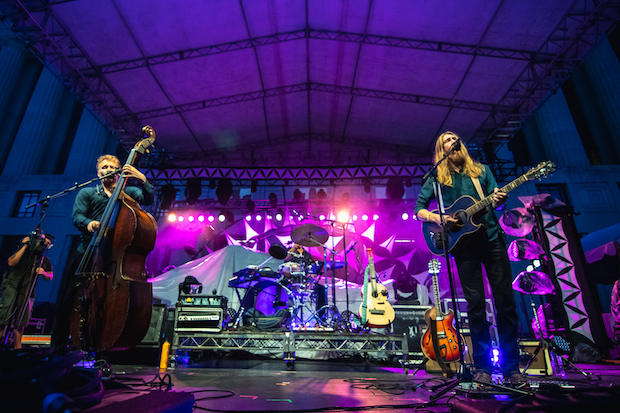 Holding the distinction of being the only Nashville-based band on the first week’s bill, The Wood Brothers are a group I’ve certainly heard named plenty, but one I somehow missed ever really getting acquainted. What I thought they were, I believe, isn’t usually my cup of tea, but after getting to see them at Live on the Green, they definitely not only seriously impressed me, but schooled me on the type of band they really are- significantly more soulful, technical, and southern rock rooted than the country and traditional vibe I had them pegged for. With the crowd finally swelling to typical LOTG levels, a setting sun, and clear skies once more, the trio (two of whom are, in fact, brothers), proceeded to kick off a fantastic, engaging, wandering set, built on a traditional, American base and exploring realms of funk, soul, jazz, rock, and even a hint of reggae.

Remarking the air smelled a bit like their native Colorado (and they weren’t talking about the humidity), frontman Chris Wood, with his scraggly, mountain man vibe, proved a versatile anchor and incredibly technical player, leaping from rock to soul to jazz to Americana licks at the blink of an eye. Mostly situated behind a standup bass, his brother Oliver helped lay down a wall of sound that landed so much thicker than a typical three piece, trading down to an electric in the latter part of the set. And pulling double duty on both percussion and keyboards, Jano Rix felt like the band’s secret weapon, filling it all out with remarkable precision.

Hitting on tunes like “Who the Devil,” “Postcards from Hell,” and “Sparking Wine” the group were magnetic from start to finish, and I noticed a lot of younger attendees in the crowd around me who, also, went in with little knowledge of the band’s music, immediately seemed transfixed, grinning and clapping along enthusiastically. That’s the magic of a festival like this- finding something wonderful you might not otherwise have given a fair chance. 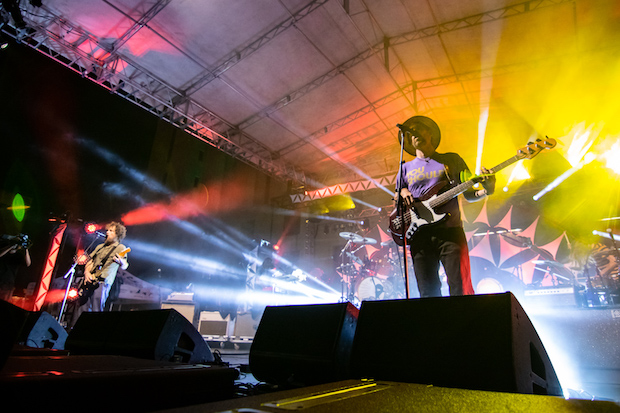 Live on the Green is technically a rain or shine event, and it takes particularly extenuating circumstances to change that. We’ve had some fun memories rocking out at the fest in heavy rain, but last year, at the start of the final weekend, a particular nasty storm and the threat of tornado weather forced cancelation for public safety, the night Dispatch were set to perform. While some of the evening’s performers were shuffled, the touring act unfortunately had to move on, but not before treating a handful of lucky fans to an intimate, pop up show in the parking lot below while the storm raged on. This year, however, Dispatch returned for a proper performance, and, fortunately, the weather cooperated- mostly.

Kicking off their set with “Be Gone,” bathed in dense fog and pulsing, colorful lights in front of a trippy, geometric backdrop, it was clear from note one that the band’s were the night’s biggest draw, tons of enthusiastic, excited fans pushing to the front to vibe along. Commenting on the unfortunate circumstances of the year prior, the group remarked how lucky Nashville was to have an event such as this, and seemed particularly appreciative of the crowd and determined to make up for last year with an extra inspired, fan-focused set.

After “Other Side” and a few other familiar tunes, I definitely could see why the band have made such a huge name in the jam and festival scene, and while their style is not exactly what I normally seek out, they impressed me with their performance nonetheless, particularly with their technical prowesses, and when their more upbeat and genre-bending sound veered into a territory of ska. Just when I thought we were in the clear weather-wise, about 30 min in or so, rain started to sprinkle down, and became progressively worse for the remaining hour, a bummer, for sure, considering the circumstances, but fortunately not as bad or stormy as it could have been (and certainly not even close to 2017).

The diehards who stuck around, and there were a lot of them, were treated to a long, career-spanning, and engaging show, perfectly suited to a festival stage, and certainly a high bar to end the first of six great nights in LOTG’s 10th season. As always, we’re thrilled to have a chance to document this wonderful, community-focused fest, and the rest of the season looks to build excitement with better and better acts each week!

Live on the Green continues this Thursday, Aug. 16 with an impressive lineup of Cold War Kids, Car Seat Headrest, Colony House, and *repeat repeat. Keep an eye out for a full preview later this week, along with our coverage after the show. And, as always, head to LOTG’s site for more info. 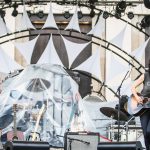 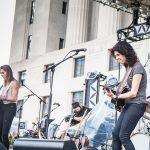 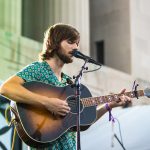 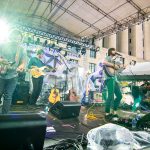 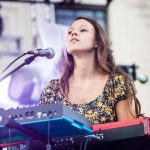 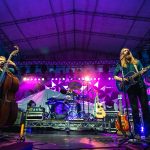 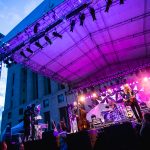 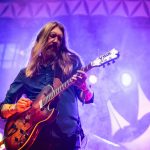 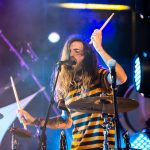 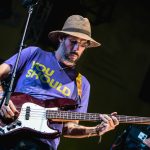 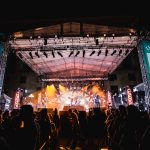 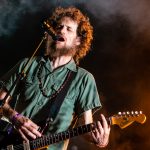 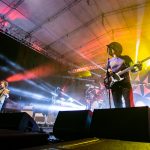 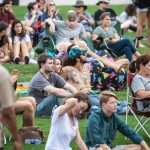 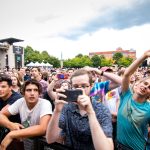 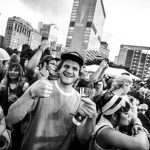 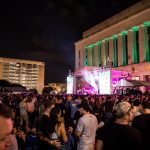 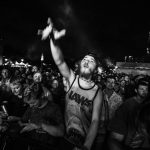 Turbo Fruits Premiere “The Way I Want You” Music Video; Catch Them Feb. 15 at 3rd & Lindsley