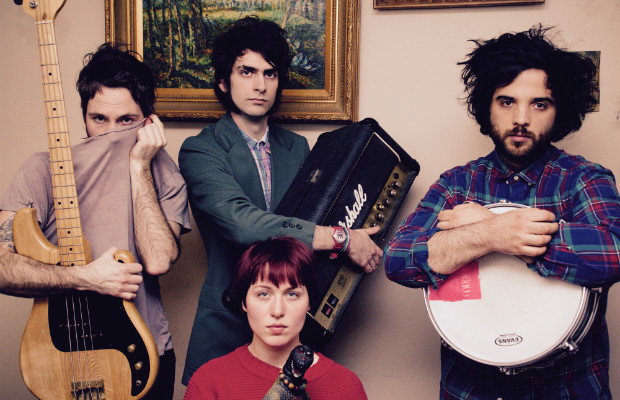 Upstart rockers Z may not be on your radar yet, but they’re aiming to change that.  The project started last November as a performance art vehicle by Nashville based producer and audio/visual artist Zach Prosser, but has since grown into a foursome, rounded out by percussionist Julian Ciany, vocalist and spoken word poet Bri Baxter, and multi instrumentalist Steven Bauer.  While the band have an obvious melodic punk nucleus, digging in deeper you can also hear them dabbling in elements of kraut, funk, hardcore, industrial, and more, and that’s been cause for our recent obsession with the sound in their single, “456,” from their forthcoming album BarbedWire.org.

We asked Prosser about the inspiration for the song, and he tells us, “The concept behind ‘456’ was making techno using instruments and technology the Beatles would have had, recorded on analog tape machines, and manipulated by hand.”  He continues, “Lyrically, it contains many elements of the thesis proposed by BarbedWire.org: emotional stagnation and numbness perpetuated by modern consumer media.”

We’re thrilled to premiere the new music video for the track below, which was created by Prosser and Window Light.  If you want to see what their fierce live show is all about, then mark your calendar for Friday, June 8, when they’ll be playing a set as part of Discovery Fest, which is presented by our friends over at Cold Lunch Recordings.  This all day event also features performances by Paul Cherry, Butthole, Dreamwave, Only, Diamond Carter, and more.  Additional details about the show can be found here.