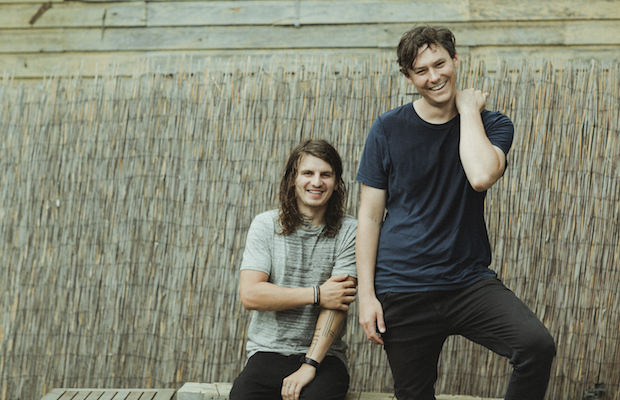 New Jersey indie rockers The Front Bottoms have been reviving emo since before it was cool, composing criminally-underrated tunes across six fantastic full-lengths (four with label backing) and just as many EPs, most recently 2017 full-length effort Going Grey, and brand new EP Ann, both through Fueled By Ramen. The group’s earnest, energetic songs are overshadowed only by their magnetic live show, and, apparently, the rest of the world has caught on, because the band have scored spots on countless high-profile festivals in recent years, especially since making the jump to FBR (the home of huge acts like Paramore and Dashboard Confessional).

Formed just over a decade ago by core members Brian Sella (vocals, guitar) and Mat Uychich (drums), The Front Bottoms’ start was pretty typical of an indie punk band, marked with grassroots releases, DIY touring, and a loyal but modest early fanbase. Always beloved within the scene, the group’s 2013 effort, Talon of the Hawk, proved to be the catalyst for broader recognition, and with the newfound buzz surrounding their last two full-lengths, The Front Bottoms are fast becoming an unlikely household name and breakout indie punk success story. To put it mildly, it’s a pretty exciting time to see them in action, and you can do just that tonight, May 31 at Cannery Ballroom, their first Nashville outing in over two years.

Sweetening the deal, Australian indie/shoegaze duo An Horse are set to open, back from a five-year hiatus with an inspired new single, “Get Out Somehow,” their first taste of new tunes since 2011’s phenomenal sophomore full-length Walls. After first rising to prominence at the turn of the decade, the band toured with everyone from Tegan and Sara to Death Cab for Cutie to Cage the Elephant, scoring countless festival and television appearances, and a wide range of critical acclaim. They’ve been out of the scene long enough to have lost a little name recognition, but we’re thrilled to see the band back in action, and they’re just as compelling a reason to turn out as the evening’s headliners!