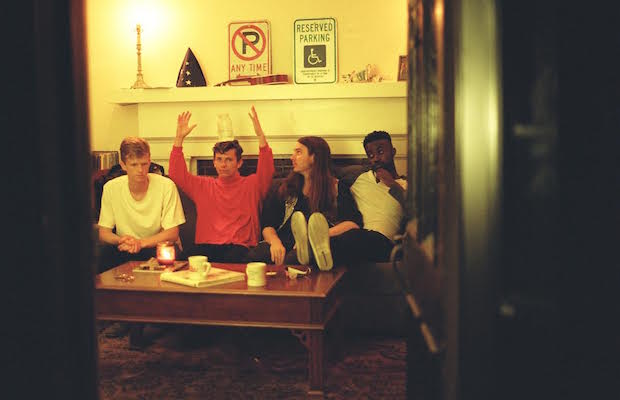 If you’re dialed into the up and coming local rock scene, you undoubtedly often see bands spring out of Belmont and MTSU, but Vanderbilt, perhaps the most academically prestigious local school of all, seems to less frequently incubate musical acts- which is why buzzy new group’s Arlie‘s alma mater (3/4 of them anyway- one member did, in fact, hail from Belmont) first caught our eye. The roots of the project trace back a few years, when frontman Nathaniel Banks started taking his solo music in a different direction, eventually recruiting Adam Lochemes, Jason Antwi, and Carson Lystad to fill out a proper band in late 2016. With the early 2017 release of their debut single, “Big Fat Mouth,” Arlie managed both to attract an enthusiastic local following (largely of fellow students) and to find national acclaim throughout the blogosphere, earning enough buzz to begin to tour.

Since then, they’ve only released two more official tracks, last year’s “Didya Think” and the more recent “blackboard.edu,” each release further honing their dreamy, indie, lo-fi, and alternative rock that simultaneously channels both retro psychedelic vibes along with more modern indie. Despite the small catalogue (a debut EP should be arriving soon), the band have already played SXSW, toured with Rostam, and have inked a deal with Atlantic, putting them on course to be Nashville’s next exciting rock and roll success story. In just a year, the group have jumped from a failed attempt to win a spot at Bonnaroo though the Road to Roo, to earning a debut spot on their own merits, and if their trajectory and quality of output continues at the pace of the past year, their next Bonnaroo outing will be on a considerably larger stage- catch Arlie now while they’re on the rise, and thank us later.