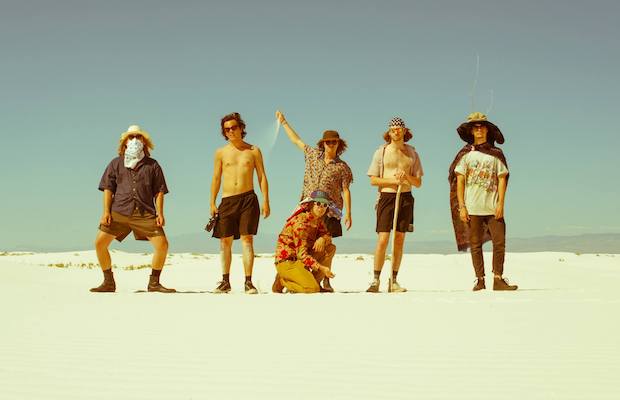 Since they burst onto the scene in 2014 with their spectacular release Forbidden Fruits, we have been huge fans of ’60s flavored psych/garage rockers The Nude Party. Despite getting their start in the peaks and valleys of the Blue Ridge Mountains in Boone, NC, the six man ensemble have been known to also dip into surf rock riffs, with splendid keyboard work and howling vocals that bring to mind legends of bygone eras like The Doors, and when you see their incredibly high-energy live show, you’ll understand why that comparison isn’t just hyperbole. The equally epic Hot Tub EP followed in 2016, and they’ve been touring nearly nonstop ever since. Honestly, we’re shocked they haven’t been picked up by a label yet, but we have a feeling that it’s not to0 far from happening. After taking up residency in the Catskill Mountains, tales of a self-titled full-length have been building for over a year now, and we look forward to seeing what they’ve been working on when they melt skulls at The East Room tonight, Jan. 20.

With help from local rock scene staples Ranch Ghost, and friends of the blog Lasso Spells, this gig has the potential to be the first best show of 2018. Music starts at 9 p.m. (doors at 8 p.m.), and you got all this talent for just $5 at the door. The headliners will be rounding out their extensive North American Paper Trail Tour in early February, and then we imagine they may take some time off to finish the new record, so jump on this opportunity to see one of the best unsigned bands in all the land for cheap, before they’re selling out much bigger venues with ease. If you’re familiar with all the group’s work, you know this is a not-to-be-missed-event, and if you’re not hip, trust us, just go. For the latter group; you can thank us later when you have a new favorite band.

The Nude Party, Ranch Ghost, and Lasso Spells will perform tonight, Jan. 20 at The East Room. The show is 18+, begins at 9 p.m. (doors at 8), and tickets are available to purchase at the door for $5.