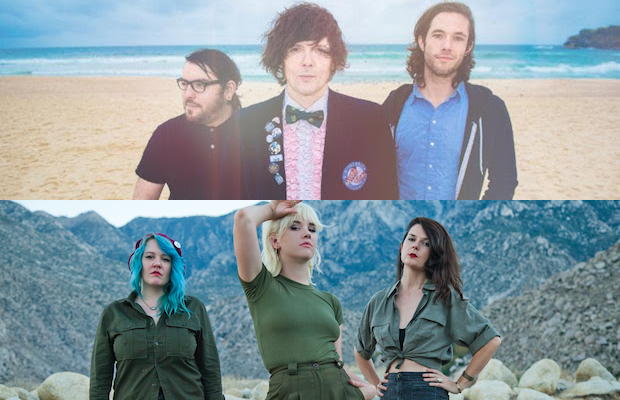 Two of our favorite bands in modern punk, Philadelphia’s Beach Slang and LA’s Bleached, are teaming up for a co-headlining tour, which brings them to Nashville’s own Mercy Lounge on Oct. 18. While we’ve seen both acts numerous times in town at smaller venues, and on major festivals stages over the the past year, they remain two of the most exciting bands to emerge in recent memory, each with phenomenal new albums out this year that rank among 2016’s best. Though markedly different, the two groups are very complimentary, and a chance to see them on the same bill makes this one of the fall’s most-anticipated shows!  You can still grab tickets right here, but we’re also giving away a pair of tickets to one lucky fan, so, if you’re feeling lucky, read on for more about the lineup and enter below!

Led by frontman James Snyder, Philadelphia’s Beach Slang co-opt elements of punk, heartland, and indie rock, playing with an energetic earnestness that feels like a love letter to classic punk without entering the territory for full-blown nostalgia; their sound is both fresh and familiar, and it’s no surprise that they’ve racked up endless critical praise from so many tastemaking media outlets and punk fans. Formed in 2013, the group made an amazing amount of headway with only a few songs to their name, Synder’s style compared to the great Paul Westerberg, and, fueled by enough initial positive response, toured extensively long before releasing an album. Their genre-bending sensibilities have earned them a place in the more pop punk and emo-geared side of the scene, performing comfortably alongside both more contemporary and trendy acts, as well as more underground and old school ones. Beach Slang’s full-length debut, The Things We Do to Find People Who Feel Like Us, ranked among 2015’s best, most underrated gems, and their brand new followup, A Loud Bash of Teenage Feelings, manages to find even more confidence, vulnerability, angst, and earnestness; not just one of this year’s beat, but also one of the strongest sophomore efforts in recent memory. A powerful live force, Beach Slang are as fun, unpredictable, and emotionally charged in person, and if you’re a fan of quality punk, this band are sure to fast become one of your new favorites.

Los Angeles punk trio Bleached are anchored by sisters Jennifer and Jessie Clavin, who, since their teenaged years spent jamming in their parents’ San Fernando Valley garage, have collaborated on various projects, most prominently former band Mika Miko. After that group split, Jennifer and Jessie briefly went their separate ways, but reconvened about five years ago to form Bleached, adding more pop hooks and melodic sensibility to their grungy, raw punk sound, and making a strong first impression with 2013’s Ride Your Heart. However, it’s their new sophomore effort, Welcome the Worms, that really has our undivided attention, employing the production duties of Joe Chiccarelli (Morrissey, The Strokes, Elton John) and Carlos de la Garza (Paramore, YACHT), and incorporating bassist Micayla Grace into the creative process, for what is their most emotionally focused, lyrically substantive, melody-driven group of sounds to date. Don’t think they’ve shed any of their punk cred though; Bleached are the real deal, and more attention to detail and higher production standards just enhances their knack for crafting compelling, personal, and powerful songs at their core. We’ve seen these gals rip live twice this year already, and we’d seriously recommend seeing them now, because at their rate they’re garnering buzz, they’ll be graduating to bigger rooms in no time.

Winner will be announced Monday, Oct. 17 at 12 p.m. CDT, and will receive one pair of tickets. Good luck!