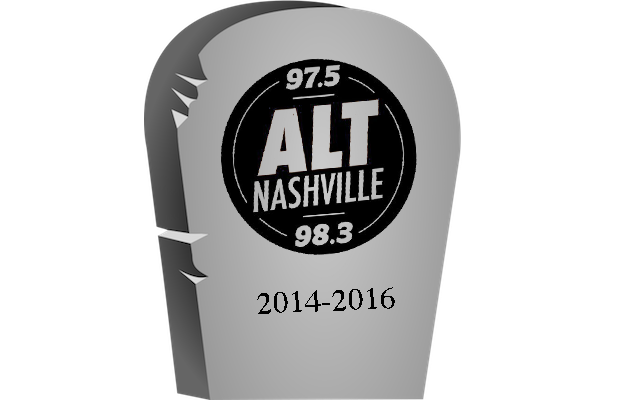 Launched in 2014 by corporate radio conglomerate Clear Channel, and distributed through their sprawling iHeartRadio network digitally as well as through traditional terrestrial airwaves, ALT 98.3 was conceived as Nashville-based offering for rock and alternative programming, finding a wonderful balance between genre hits (lots of ’90s grunge and alternative in particular) and contemporary and local tunes, spilling over on into the realms of indie and pop, and frequently programming artists hard to find on Nashville airwaves. Though seemingly popular, and essential in a radio market with only a handful of alt rock options, the station quietly disappeared over the weekend, replaced by a new country station (in a market unsurprisingly saturated with them) called The BIG Legend 98.3. Our gripe’s not with the new station, how unnecessary it might feel; ALT 983 was part of the corporate radio machine, after all, and airwaves aren’t going to go to waste. What stings, though, is how abrupt the station’s demise seems to be, adding insult to injury by literally retiring and replacing social media accounts and websites, effectively eliminating all traces of its existence from the internet, with no apparent announcement and little forewarning.

Fortunately, we still have fantastic local stations like Lightning 100 and WXNA, and internet upstarts like Acme Radio to fill the void, and it seems that the on-air talent from ALT 983 (including former Lightning 100 DJ and current reality TV star Wells Adams) are mostly shuffling around to other stations. Still, the demise of an alternative rock station in town more stepped in relevant, contemporary rock than ever feels like a major loss, and we’re sad to see ALT 983 go.