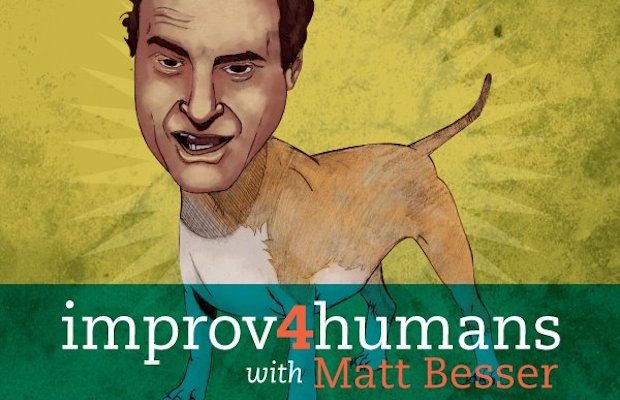 If you’re a fan of improv comedy, then you’ve likely heard of the famed Upright Citizens Brigade, and, if you know the UCB, there’s a good chance you know one of its most visible and active original founders, Matt Besser. After growing up in Arkansas and trying his hand at standup in college, Besser settled in Chicago where he assimilated into the thriving improv scene, founding the UCB in 1991 initially as a sketch group. After relocating to New York in ’96, UCB made a short-lived but cult-loved sketch show on Comedy Central, and opened their first theater, now an integral part in the New York improv scene. With four show spaces now across New York and LA, UCB has become synonymous with quality improv, and their theaters have played host and mentor to many rising comedians who’ve gone on to find runaway success in film, television, podcasts, writing, and beyond. Many long-running associates, including Matt Besser, still perform on a regular basis.

Besser also hosts a totally improvised weekly podcast, improv4humans, featuring a panel of guests and often fellow UCB performers, on the Earwolf network, and that’s the show he’ll be bringing to Bonnaroo, with guests Jon Gabrus and Mary Holland (two names you’ll definitely know if you’re a fan of the show). Hosted in the Cinema Tent, the live podcast will be paired with the documentary Thank You Del: The Story of the Del Close Marathon, which chronicles an annual improv marathon in honor of the late Del Close, a legendary improv coach known for training greats like Bill Murray, John Candy, Tina Fey, Stephen Colbert, and Matt Besser himself. Needless to say, if you’ve never been to UCB, this sounds like the next best thing.