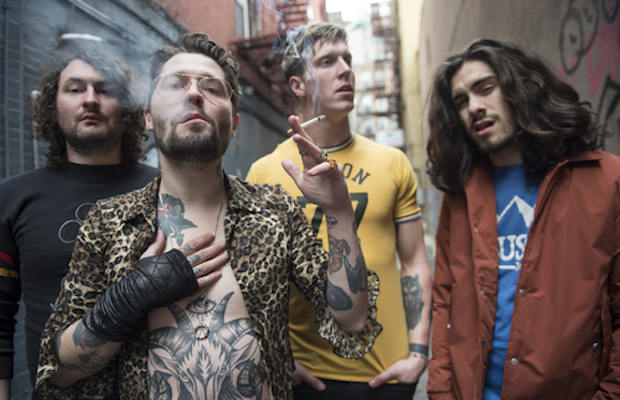 One never points to Des Moines, Iowa as a hub for new and exciting rock and roll, but Holy White Hounds are out to change that. The quartet’s story is the classic tale of small-town teenagers escaping the monotony of home with the power of music. Back in 2005, Brandon Dean (vocals, guitars) and Ambrose Lupercal (bass) began teaming up and writing songs in their parents’ basement. During these years the duo met Brandon Darner, a talented producer who really began to respect the band, but it wasn’t until after the group finished college that they teamed up with Darner to record their first full-length record Sparkle Sparkle, which dropped earlier this year.

The band has managed to form themselves around a style that draws from some of the best rock and roll of the past decade, and their debut album shows a band that has worked tirelessly to bring their sound to life. The production is flawless, from the distorted riffs in “Switchblade” to the driving beat in “Blind,” evoking the sound of some of the biggest heavy hitters of the past decade such as The Strokes and Queens of the Stone Age. Don’t be a fool and miss their set because they are sure to rock you all the way back to your tents this year on the farm.