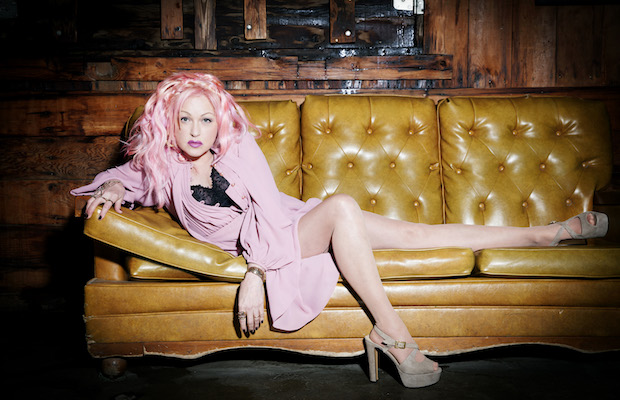 Kicking off a tour in support of her upcoming 11th album, Detour, it seems only fitting that pop icon Cyndi Lauper would play Nashville’s own Ryman Auditorium tonight, May 9! That’s because Detour is a country album, recorded right here in town, featuring covers of classic standards with a handful of big-name guests; something Cyndi, largely known for her pop and new wave tunes, has always dreamed of making. Featuring openers The Peach Kings, tickets for tonight’s show are still available right here. While we’d assume the setlist will showcase favorites from all era of Lauper’s career, we’d except her to really embrace the country material, being Nashville and all, and maybe even welcome some special guests. Read on for a full preview!

Famed pop star and ’80s icon Cyndi Lauper is, inarguably, still best known for massive 1983 debut, She’s So Unusual, which went on to sell more than 16 million copies worldwide, and spawned enduring classics like “Girls Just Want to Have Fun,” “Time After Time,” and “She Bop,” earning Lauper multiple Grammys and a VMA, and bringing her style and sound to the forefront of popular culture. In the 33 years since, Lauper, who grow up in Queens and dabbled in other musical projects before finding solo success, has released a steady string of albums, continuing to stay relevant, pushing her sound beyond just her tried and true pop and new wave influences, and toured the world over and over, collaborating with more big name artists than we can name, undeniably becoming a certifiable cultural icon. Not just a successful and unparalleled singer, Cyndi has dabbled over the years in acting, and has from the start been involved in activism, particularly in regards to the LGBT community. She’s won Grammys, Emmys, MTV awards and more, and most recently, even nabbed a Tony for her score to 2012 Broadway production Kinky Boots.

Though she’s never shied away from embracing and continuing on the steam of her earliest material and trailblazing sound (influencing contemporaries like Katy Perry, Lady Gaga, and more), Lauper has put her natural vocal prowess to the task of exploring new styles with her most recent releases, first with 2010 blues effort Memphis Blues, and, next, upcoming eleventh album Detour, set to drop May 6. Featuring guests like Willie Nelson, Emmylou Harris, and Alison Krauss, Detour features covers of country classics from the ’40s, ’50s, and ’60s, and was recorded right here in Nashville with the help of some local session talent. A lifelong dream of Lauper’s, she claims that when she was young, country was essentially pop music, and though its influence might not be so readily apparent on her early work, it was an important part of her musical upbringing. Hear her tackle Wanda Jackson’s “Funnel of Love” below, for a taste of what’s in store for the new album. Though we’re not totally sure, we’d assume tonight’s show will be a mix of country covers and Cyndi Lauper’s hits; either way, we know it’ll be an unforgettable time.

Hailing from Los Angeles, fuzzy alternative/indie duo The Peach Kings are made up of Paige Wood and Steven Dies. Their riff heavy, bluesy sensibilities paired with haunted, sultry vocals make them a worthy choice to open for Cyndi, and with a few years of tours and buzzworthy original releases under their belt, we’re excited to see what their live show has to offer.