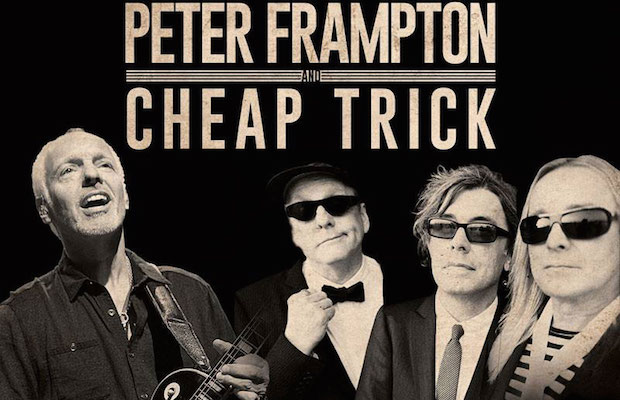 Two ’70s rock legends, Peter Frampton and Cheap Trick, are set to co-headline Ascend Amphitheater tonight, Aug. 16, continuing the momentum of what’s been an amazing few weeks for the brand new venue. Complimentary, but distinctly different in their approach and influence, both acts are worthy of your attention in their own right; together, they cement this as the must-see show of the weekend. With tickets starting at only $15, how could you say no? Read on for details!

Rock legend (and current resident of Nashville, we’re told) Peter Frampton erupted onto the music scene in the unlikeliest of ways: with a live album. After launching his musical career as a teen in both The Herd then Humble Pie, the English singer/songwriter/guitarist/talk box pioneer went solo at the start of the ’70s, met with moderate interest until, of course, 1976 smash hit Frampton Comes Alive!, which dominated the charts, wowed critics, and went on to sell more than 10 million copies worldwide. Frampton has continued to tour and produce albums in the decades since, and, while his position as a musical legend is certainly cemented, his career has ebbed and flowed over the years, though he’s definitely entered into legacy act territory, and will continue to tour on the hits ad infinitum. Judging by the setlist he’s been playing for this tour, the hits are exactly what you can expect tonight, so come catch this living legend while he’s still on the road!

To someone who grew up after the heyday of Peter Frampton and Cheap Trick, it’s sort of hard to imagine them both coming up at the same time. While Frampton’s sound, more “classic rock” and tied to the scene of the ’60s and early ’70s, is a well-crafted reflection of the times, Cheap Trick, also a product of the ’70s were ahead of their time, foreshadowing a shift in rock aesthetics that would dominate the ’80s. Initially embraced in Japan with something of a  Beatlemania-esque fervor, though not especially well-recived stateside, Cheap Trick broke through in the U.S., ironically and somewhat paralleling Peter Frampton, with a live album recorded in Tokyo, Cheap Trick at Budokan. Fueled by their newfound attention, several of the group’s best singles surged back onto the charts and their hard rock meets proto-power pop sound, bombastic and theatrical live show, and unorthodox sense of songwriting helped influence a whole generation of bands, ranging from ’80s metal to ’90s alternative to punk. Now independent, Cheap Trick’s legacy has been lumped in with more “classic rock” leaning artists, and, while that’s not an unfair adjective, they’ve always felt a little more special, innovative, and relevant than many of their peers. With over 5,000 shows under their belt throughout their decades of touring, you can always count on a Cheap Trick show to be nothing less than spectacular.

Peter Frampton and Cheap Trick will perform tonight, Aug. 16 at Ascend Amphitheater. The show is all ages, begins at 7:30 p.m., and tickets are available for $15-99.50.

The Balkans, Exit/In, Tonight In Nashville