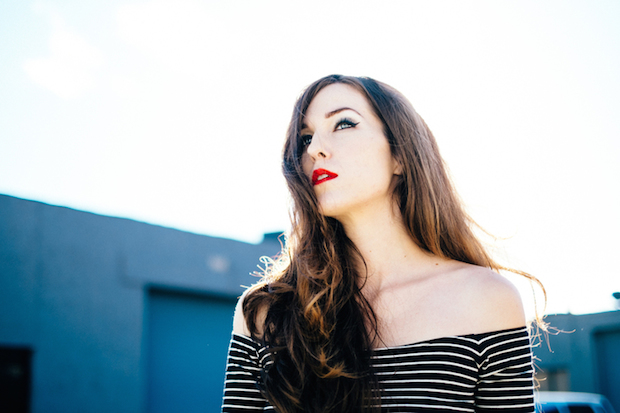 Rockabilly singer Jessica Lee Wilkes is a throwback artist inspired by the rock and roll and rhythm and blues made in the 1950s. Wanda Jackson is allegedly a fan, and Wilkes is certainly inspired to be a modern rockabilly femme fatale similar to that legendary songstress. Wilkes cut her teeth playing bass in the group JD Wilkes & the Dirt Daubers, but now she’s striking out solo for her first record on her own appropriately titled Lone Wolf. Like the best of classic rockabilly, the music has a cheeky sexuality and sexy rebellious attitude set in a 12-bar blues. The album is due out later this summer, and you can hear songs from it this evening for free by catching Wilkes perform in-store at Grimey’s.

Playing standup bass for five years in the Dirt Daubers helped Wilkes build her musicianship and the confidence to embark on her own venture as a frontwoman. She switched to electric bass in her solo project, adding swing horns, punk attitude, and surf guitars into the mix for a hodgepodge of vintage sounds — a pretty popular and modern phenomenon that just has an old-time feel. She also puts the original sex appeal meant to be found in rockabilly back into music you might usually see being played by a cover band composed of old men. See what I mean with the first single “The Groove’s Too Shallow” below.

Jessica Lee Wilkes will perform Wednesday, July 29 at Grimey’s. The show is all ages, begins at at 6 p.m., and it’s free!

The Young Rapscallions, Sol Cat, and The Kingston Springs | Tonight @ The High Watt