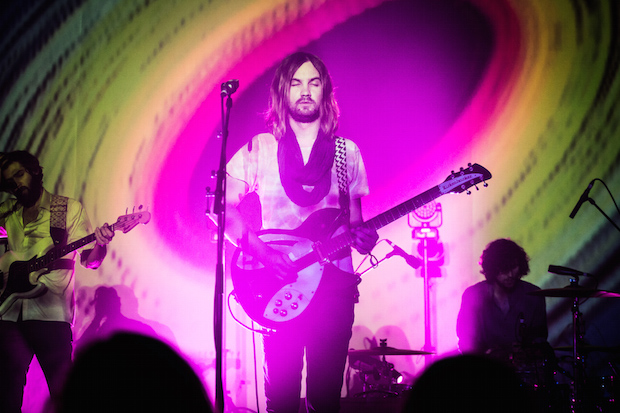 Not every band get’s the chance to play ‘The Mother Church” (aka Ryman Auditorium) their first time in Music City. Not to mention, sell it out? That puts Tame Impala in even rarer company. The Australian, via outer space, psych rockers put on one hell of a show, with more than adequate support from LA trip-pop trio Mini Mansions. Read on for a full report and some seizure-enducing photos from contributing photographer Matt Cairns.

Any trip to the Ryman for a show is guaranteed to be a great time, but this trip was going to be a little different. Walking from dinner with friends at a lousy Mexican restaurant just off 2nd Ave, I was approached by two middle-aged men who were in need of a light. Having one on my person, I obliged them and we all shared a smoke. They were heading to The Who, who were playing Bridgestone Arena the same night. Only in Nashville could The Who be the second coolest show to catch on a random Monday night in May … least in my opinion. 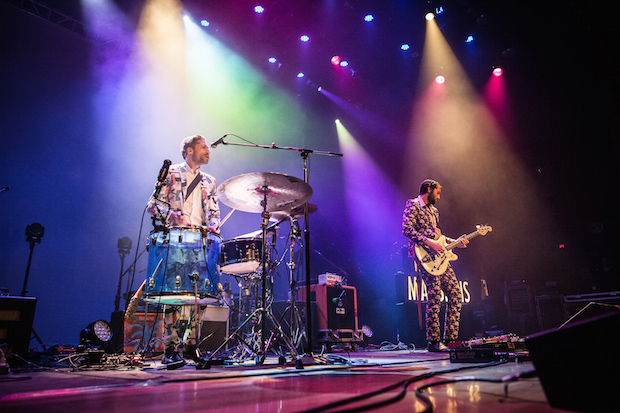 Feeling relaxed and fancy free, I got a drink from the bar, and found my pew in the auditorium. With the sun setting through the stained glass behind our heads, Mini Mansions came out to a very sparse crowd to start their set. Luckily, once the music started, it began to fill up fast, which is what usually happens at shows in Nashville. We’re real music fans here (for the most part), and we come for the tunes.  So once they start, we get to our seats. I’ve never seen a town show up for openers like we do here.

Billed as Queens of the Stone Age bassist Michael Shuman’s side project, they showed from the start that they’re tuned, seasoned and engaging musicians. They’re touring in support of their recently released sophomore album The Great Pretenders, which is extremely good. Their self-titled debut is nothing to overlook either. Both LPs showcase their new wave Beach Boys (on better acid), meets blues-pop vibes. It was insane to see Shuman killing it on drums standing up, while singing, knowing how talented he is on bass guitar too. Mansions’ bassist/guitar player, Zach Dawes, was doing crazy, heavily effect laden shit with his instrument I had never seen before. It looked like a four string bass guitar, but had the sound and shredder vibe of a normal electric guitar, and NEVER have I seen such an elaborate peddle set-up for a bass guitar. I would 100% recommend checking them out any chance you get, and it seemed like the crowd agreed with me, as they cheered throughout the openers set. 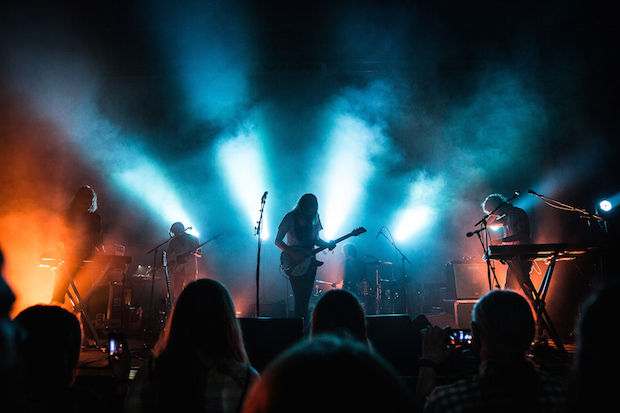 After a smoke break, and some gut wrenching moments in line waiting for my Hatch Print poster, praying they wouldn’t sell out, I was back in my seat and ready for the main event. During the intermission, I’d noticed that several seats in the front row of the balcony had been roped off. A massive, elaborate looking older-style movie projector was set up. The band’s army of crew members, all wearing long, white mad scientist style lab coats, were a flutter of motion. Several worked on stage, tuning instruments, checking mics, testing lights, and making sure the massive array of gear (countless pedals, keyboards, guitars, etc) were just so. One was up in the balcony, working on the projector, his walkie-talkie fuzzing occasionally with instructions. True professionals. It was obvious that they were taking things very seriously, even if they looked very silly in their starched white coats.

Once everyone was satisfied, the skull melting commenced. Genius level arranger/producer Kevin Parker took the stage with his friends/bandmates; ready to unleash Tame Impala. The psyched-out jams snatched us up from the first notes, and the insane light show was like nothing I’d ever seen in The Mother Church before. Several eye level, multi-colored strobes faced the crowd and flickered in time to the music from behind the band. The house lights bounced beams in crazy trajectories, and, all the while, projected psychedelic images blasted, super-imposed over the band. At any given point, it was showing multi-colored TV snow, rainbow colored eclipses, airplane window views of a countryside somewhere with crazy squiggles of color sprouting through the image. Sometimes it was an inferred live feed of the band, and, of course, there were kaleidoscoped patterns for days. It was the brightest I’d ever seen it in the Ryman. The highlight of the show’s visuals were when Parker, in his barefeet for the duration, had his guitar directly running through projector, displaying a bright neon green blip on the massive stage backdrop. Similar to the bouncing blips on a heart monitor, every time he strummed a note the green dot responded with a crazy shape or patterned pulse. It was trippy as fuck. The only thing missing was some LSD (for me anyway, others seemed like they’d already had enough).

They continued to prance through their set, playing a crowd favorite, “Elephant,” but jamming it out much longer than the album version. They had two musical break downs within the song, running off topic for one, and into some type of deep space jazz, before coming back into the familiar bass line, well after everyone had forgotten what song they started on. Everything about their sound was beautifully balanced. The guitars, keys, and drums all complimenting one another, and Parker’s trademark reverbed vocal marrying it all together. At times they reminded me of early an Flaming Lips record. Vocal reverb done not just right, but done perfectly; to augment the sound, not hide poor singing. Faint whiffs of pot were a near constant, and it was obvious most of the crowd was a little out of their heads. Drugs or not, it was easy to lose ones self in the music at this show. Chill, happy, hippie like vibes a plenty.

The high point for me was when they played “Feels Like We Only Go Backwards,” for the first part of the encore. It was the song that turned me on to the band, and the audience all sang along to the impossibly catchy hook. Before their last number, and after some direct pulls from a fifth of Makers Mark, the band thanked us in their thick Aussie accents. It was obvious, like so many that play the Ryman for the first time, that they were floored by the crowds enthusiasm and the epic, pitch perfect resonance of the auditorium. The building itself becomes an instrument, especially with a band who takes their sound so seriously. Do yourself a favor, check out Matt Cairns’ amazing photo spread below, and get hip to Tame Impala, if you haven’t already. They keep putting it down like they did in Music City, and we’ll all be calling them our generation’s Pink Floyd soon enough.

Get to know: WILD FLAG