I’ll be honest… after Bonnaroo, I wasn’t all that excited to head out to another music festival quite yet. Throw in the fact that I’ve seen almost every band on the bill more than one time, why would I want to subject myself to the masses, the hangovers, the porta-pots, the… I mean, I just did that, right? I just had one of the most epic Bonnaroo’s ever! Why would I want to go to another festival right after that would leave me disappointed? Alas, most of the greatest experiences in your life happen when you least expect them, and that is exactly the way Louisville’s Forecastle will live in my memory.

You can read our full 24 hour festival recap along with some amazing pictures by Sean Marshall Studios (as well as some crappy ones from me). You’ll surely figure out the difference for yourself. 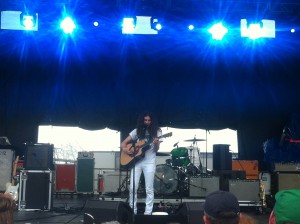 So, after a slightly late departure from Nashville, we arrived just in time to see one of the few bands on the bill that we were excited to see for the first time, Foxygen. Ok, I’m a big fan of Foxygen, but I figured I was going to be truly disappointed by the genre spanning style of this new on the scene California band. Alas, they play harder than anyone could ever imagine. Please, bring these cats to Nashville soon. Many times seen, Dawes and Mona (and the Bourbon Tent) filled the space until personal fave Kurt Vile took over the Boom Stage. Despite being a massive fan, I must have told a dozen people in Nashville to go to see him on his local dates the following day, because you would be blown away by the guitar chops of the long-haired shoe gazer. I was amazed by the maturity in Vile during his set. He ripped through songs like an old vet, and even had the Philly-bred gall to flip off a trucker on the nearby freeway overpass who was honking at the festival as though it was directed at his mother. Next up was a quick blast of TOKiMONSTA while heading over to check out pseudo-locals Alabama Shakes… Ok, let’s enter the part of the night where I have already seen all the acts numerous times… yet, it was the intimacy of this little festival that kept me intrigued. From the soulful crooning along the Ohio River of Shakes’ Brittany Howard (note: she was serving drinks in the bourbon tent to many a happy fan after her set), the sweet welsh squealing of The Joy Formidable, or the harmonically pleasing sounds of the solo, Louisville-native, “Jacket” Jim James. Things got really exciting again for the The Flaming Lips. Despite seeing them on numerous occasions as well, it was the most enlivened performance I have seen from the near 30 year old rock quintet. And, when they set in with one of the most under-appreciated riffs in rock and roll history with “The Wand” in the second song, you just knew it was going to be a special night for The Lips. Regardless, I left before the end in search of more bourbon and the endlessly catchy pop of Matt & Kim playing, where else, but in an urban underpass. I’m not sure why that stage was so fitting for them (and numerous other acts throughout the weekend), but if you could ever call an underpass crowd, capacity, Matt & Kim made that happen. Finally, it was time for the headlining Black Keys, with a fresh 12 song set list that was refreshment for the ears. The boys shredded, per ush, and it seems they are finally comfortable not being known as the Ohio two-piece. A perfect end to a perfect first night at Forecastle. 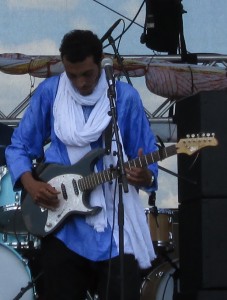 Sunday, somehow, started relatively early when we rolled out to see acclaimed Nigerian guitarist Bombino. With all the connections to Nashville through recording his last record with The Keys’ Auerbach (not to mention his recent show at a local bowling alley that our contributor Lauren made it out to see around the ‘Roo), this was my first time seeing Bombino, and, thank the sweet whatevers that I got up that morning to check out this inspiring set. We followed up Bombino with a set from retro popsters Tennis, who are also related to The Black Keys since drummer Patrick Carney producing their last record. I spent a bit of time with Columbia, South Carolina native (& Pitchfork darling) Chaz Bundick, who you may know by his moniker Toro y Moi. It was enjoyable, but sounded produced… and, as Sunday’s at music festivals tend to do they lead you towards your roots (I have no idea why this is). So, I bolted to check out the Austin, TX powerhouse The Wheeler Brothers. If The Wheeler Brothers could have possibly lacked anything in ability, they made it up for in sheerly overwhelming stage presence and charisma. The packed crowd at the festival’s smallest stage was one of the most lively I saw for the entire festival. And, by comparison, what the band lacked in stage presence and charisma, Greensky Bluegrass abso-fucking-lutely made up for in musical aptitude. This was another of the highlights of the festival.  From seeing photographers high-fiving security guards to the throngs of dancing hippies… what could better define a Sunday in the park? Well, um, Killer Mike + El-P?  When I finally made it back to the underpass stage, there was, what the critics would describe as a throng, a sweating, swirling, fist-pumping mass of humanity that over took the eastern end of the park.  Unfortunately, No Country’s primary sponsor (read: my day job) required us to boogie back to Nashville before finishing things out, but I will leave you with this…

Fear not Bonnaroovians, this little festival is easy, accessible, cheap, and incredible. Don’t warsh your summer music plans away after the mid-June massacre in Manchester. Get up to Louisville for an incredible experience. We’ll see you next year at Forecastle!

Ok, before we go any further, do you see those crappy pictures up there scattered throughout? Those are mine. If you want to see some really bad ass pictures, skim through just a few from one of our contributing photogs Sean Marshall Studios below.