This entry will launch a new series of blog entries dedicated to the musical people and places of my home-‘hood, East Nashville.  Stay tuned.  There will be interviews, stories, legends, rumors, and more!  Tia

If you have read my last artist feature about the Blackfoot Gypsies, you KNOW how much I love gypsies.

I think the most fascinating fact about them is that they are both the most romanticized and despised individuals in the world. Classic Literature and Opera provide examples. Sigh, Erik and Heathcliff. Esmerelda and Carmen! Gypsies have been labeled everything ranging from “’dangerous rogues” to “glamorous folk-artists”. Fascination and suspicion makes for some hot-ass music.

A typical Gyspy-music (also called Romani) ensemble includes violin/mandolin, accordion, bass, and most important: the guitar(s). Occasionally you’d get a clarinet in there when a violinist was absent: Hubert Rostaing! The legendary Gypsy-jazzer, Django Reinhardt certainly belongs in the guitar-god category with Page, Hendrix, Richards, and Van Halen. He was born in Belgium and raised among a tribe of Manouches in the town of Paris in 1910. At the age of 18, he was injured in a fire mishap that permanently damaged the ring finger and pinky of his left hand which forced him to create a new technique using his remaining two fingers in a time span of only 18 months. (He played all of his solos and chords with the index and middle finger). In 1934, he met the famous violinist Stéphane Grappelli, and formed the Quintet of the Hot Club of France. Thus, Gypsy-jazz was born. Many cities all over the world have Hot Clubs of their own—San Francisco, Detriot, and New York, etc. East Nashville is no exception. 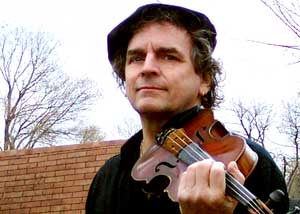 For many years, there has been a legend about a crazy gypsy ‘Fiddler on Fatherland’ who dances and plays songs on the roof of his Victorian house.

This is absolutely TRUE.

In fact, I hung out with this elusive Tennessee Tzigane yesterday. Peter Hyrka is the co-founder and leader of The Gypsy Hombres, the sizzling-est Hot Club in Nashville. They have recently become regular performers at the Southern Restaurant during Sunday Brunches, and occasionally play at the Family Wash. The Hombres don’t often meet outside of a restaurant setting. Since I hadn’t seen them in the hood for a while, I thought I’d check in with Peter to see what’s shakin’. 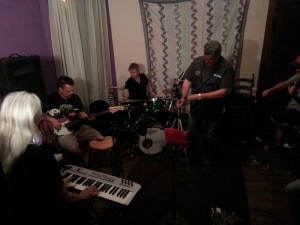 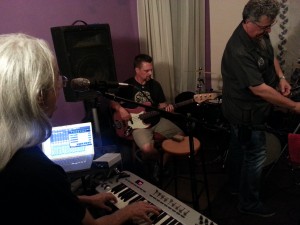 Hyrka has many projects going on these days including playing fiddle for the famous 90s band Human Radio, who coincidentally were recording the first songs (in 20 years) of a new album during my visit. The other two Hombres, Rory Hoffman and Jason Oettel perform and travel with various musicians.

The turquoise Fatherland vagabond house was exactly like I imagined it would look. There were PLENTY of beads, instruments, incense, a junky-antique bike on the top of his cupboard, Christmas lights, margarita lights, Black Cat Firework signs, old concert posters, and hilarious photographs of friends on the fridge. Human Radio was preparing dinner before the next recording session. More on them another time.  For now, let’s get into our interview with the “Fiddler on Fatherland” himself, Mr. Peter Hyrka. 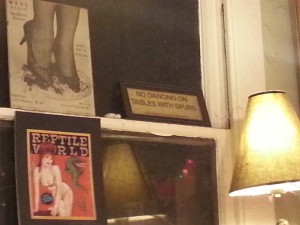 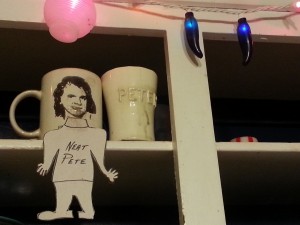 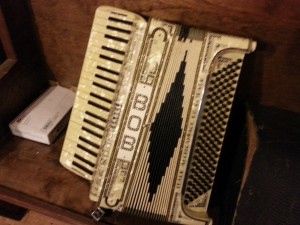 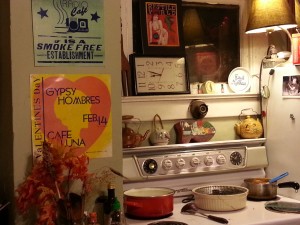 Me: “What’s new with the Gypsy Hombres? When’s the last time you’ve recorded?”

Hyrka: “It’s been far too long since our last album, Nouveau (2005). I’m working on putting a Kickstarter together in order to raise funds for our next album.”

Hyrka: “I have an idea. Something with the word Caravanistan in it. Caravan like traveling groups and the –istan because there are a lot of countries’ names that end that way. I already have the cover art: a picture I took of a friend’s dirty yellow 199-something Honda Civic. You know, the bubble shaped car? This one was stained with rust and bird shit. It’s gonna look like one of those postcards you buy in Florida, except it will be from Caravanistan.” (chuckles)

The Gypsy Hombres have been around since the mid 1990s, but Hyrka’s love of gypsy-jazz began when he heard Django Reinhardt on a community radio station back in his home town of Memphis, TN, many years ago.

Hyrka: “The first instrument I had was an accordion. I was 8 years old. I recorded my first piece with the whole classic vinyl set-up. You know, the type where you cut the wax and leave shavings all over the floor. I don’t know where this recording is, likely buried in my house somewhere. It’s probably like, (chipmunk voice) My name is Peter and this is my first piece. (pulls hands out) nooote. (pushes hands in) noooote. (laughs) I have 8 accordions as of today.”

Me: “How did Memphis shape your musical identity?”

Hyrka: “I lived there, but I am a Polish-Russian guy. Don’t get me wrong, I love the blues; however, it just wasn’t in me. Gypsy is in my blood.” 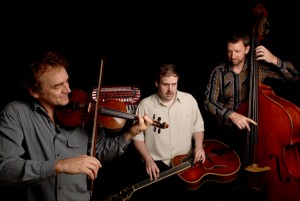 Like most violinists, Peter began with classical training. Serious players usually start before kindergarten, yet he began playing at age 19.

Hyrka: “When I was at University of Memphis, my professor of ethnomusicology, Dr. Dave Evans had a big influence on me. He knew a lot about blues, jazz, and culture. I had many violin teachers. Most were old traditionalists. I was involved with several small symphonies: Huntsville, Jonesboro, Bowling Green, and Jackson. However, I found that the restrictions of playing orchestral music were not for me. I’d rather sign up to be in the army than play as a member of a violin section. There is no freedom for artistry and individuality. You can’t make your own choices. You have to sound and look like everyone else. I had been performing with *Nameless Symphony* for a long time until a new conductor was hired from overseas. He quit calling me for gigs when he discovered I played jazz on the side.”

Me: “Oh yes, I am very familiar with this atmosphere. It can be cut-throat.” 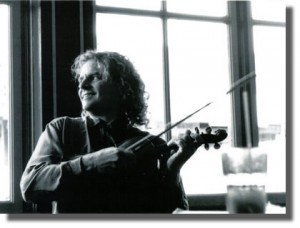 To develop his commercial technique and sound concept, he studied records of Django and Stephane. He also channeled the style of great musicians like Vassar Clements and Joe Venuti. He retained aspects of classical sophistication by using well-known melodies of composers like Tchaikovsky, Chopin, and Brahms but in improvisational ways. Fusion is a big characteristic in gypsy music. It’s like song-stew. Mix it in the crockpot and let it blend deliciously.

Hyrka: “I emulate soloists that I like. I channel those who aren’t afraid to stand up and do their thing. Joe Venuti was THE amazing American pioneer jazz violinist. There are two things everyone in this business knows about him other than he was a good musician. 1.) He loved practical jokes. 2.) He had a HUGE dick. Haha.”

When Hyrka moved to Nashville in 1991, he continued to develop his craft by surrounding himself with good musicians he admired. He played in the band, The Sky Kings (Bill Lloyd, Rusty Young, and John Cowan) and Chet Atkins would come hear the Hombres play at Bosco’s when it first opened. Nashville provided the eclectic enviornment perfect for the Gypsy sound. 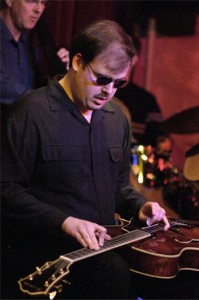 Speaking of playing with awesome musicians, The Gypsy Hombres’ own Rory Hoffman is one of the best artists I have ever heard in Nashville. I remember being BLOWN AWAY when seeing him picking at the Wash. Hoffman and was born blind (so were his three siblings). Like Django, he created a personalized system to play guitar when he was just four years old. His hand couldn’t reach around the neck of the guitar so he would lay the instrument down. Although the guitar is strung for a right-handed player, he uses his left and plays the strings over-handed like a keyboard. Since he’s never seen anyone play a guitar, he’s never changed it. You’d never detect all this difference with the naked ear.

Hyrka: “Rory is amazing. I love to tease him into thinking he’s wearing a blue shirt when he knows he is wearing a red shirt. Haha. The fact that he can’t see helps keep ME focused. During a show, I’ll be thinking about the food going by my head or being distracted by the hot woman ordering a beer. He can’t see any of that, so he just keeps going.”

Me: “So he’s the bread and you are the butter?”

Me: “Where did this fascination with Gypsies come from?”

Hyrka: “I’ve met lots of gypsies. When I worked as a waiter in Memphis, you’d get this huge cluster-fuck of a group with adults, kids, grandparents, etc. sitting down at tables (or running around) hardly ordering anything to eat or drink and they’d walk off and leave you with tons of PENNIES. In Nashville, when the Hombres performed at the opening of Opry Mills, a man with a big black moustache and dark skin came up to me and was convinced that I too was a gypsy. Next thing you know, I turn around to speak with him and the whole family appeared to greet me. It was embarrassing to explain I wasn’t really a gypsy, that’s just the band name and style. I’ve also done some traveling in Europe and got to experience this culture first-hand. Interesting people.”

Me: “So this is the reason behind your group name?”

Hyrka: “My guitarist friend, David Sebring came up with the name. At first I was trying to come up with an intellectual title with something like ‘Algonquin’ in it. I realized though that ‘gypsy’ matched my vision for the type of music I wanted to make. I don’t label our group as jazz. It is more like world music. We mix everything from South American to Eastern European. World music is soul music to me.”

The Gypsy Hombres are some of best damn artists in Nashville. Artists who are dedicated to playing/preserving this historically significant, multi-cultural, and inspirationally beautiful music genre deserve our support. Nashville wouldn’t be as charming without them, y’all.

Tonight is your next chance to experience them live.

They are also regular performers at The Southern restaurant downtown during Sunday brunch hours.